Under the Pesticide legislation, the most hazardous substances to human health or the environment must be strictly regulated to ensure a high level of protection in the EU. Namely, their authorisation  in pesticide products by Member States can only occur when no safer alternative exists. The alternatives can be chemical substances or non chemical methods.

This ‘substitution principle’ has been mandatory for all Member States since 2015. By 2030, the EU is committing to cut by 50% the use of these most dangerous pesticides containing these substances as part of the Farm to Fork Strategy.

In this context, the substitution of these most hazardous substances should help the EU move toward a sustainable food system and a toxic free environment. Yet, this campaign reveals that substitution with a non-chemical alternative has never taken place since 2015.

Instead, recent studies showed that European citizens, including the most vulnerable groups, remain significantly exposed to the EU's most hazardous pesticides, whether through their food or in their environment.

In total, 53 of these most hazardous substances are approved in the EU and found in hundreds of pesticides products. These substances are suspected of causing one or more severe impacts on human health, such as cancer, birth deformities or heart disease - or to be toxic to wildlife.

We have created a database on the 53 most hazardous substances approved in the EU, including detailed information on their toxicity to humans and the environment, and the level of exposure of consumers.

We have identified the 12 most toxic chemicals for which, together with our partners, we demand an immediate ban:

The other demands of the campaign and the partners can be found in our campaign manifesto.

In our  report ‘Forbidden Fruit’, we revealed that EU consumers are increasingly exposed to residues of these most hazardous substances in fruits and vegetables grown in the EU. This exposure has risen by 50% for fruit between 2011 and 2019 and by more than 100% for products such as apples and pears. 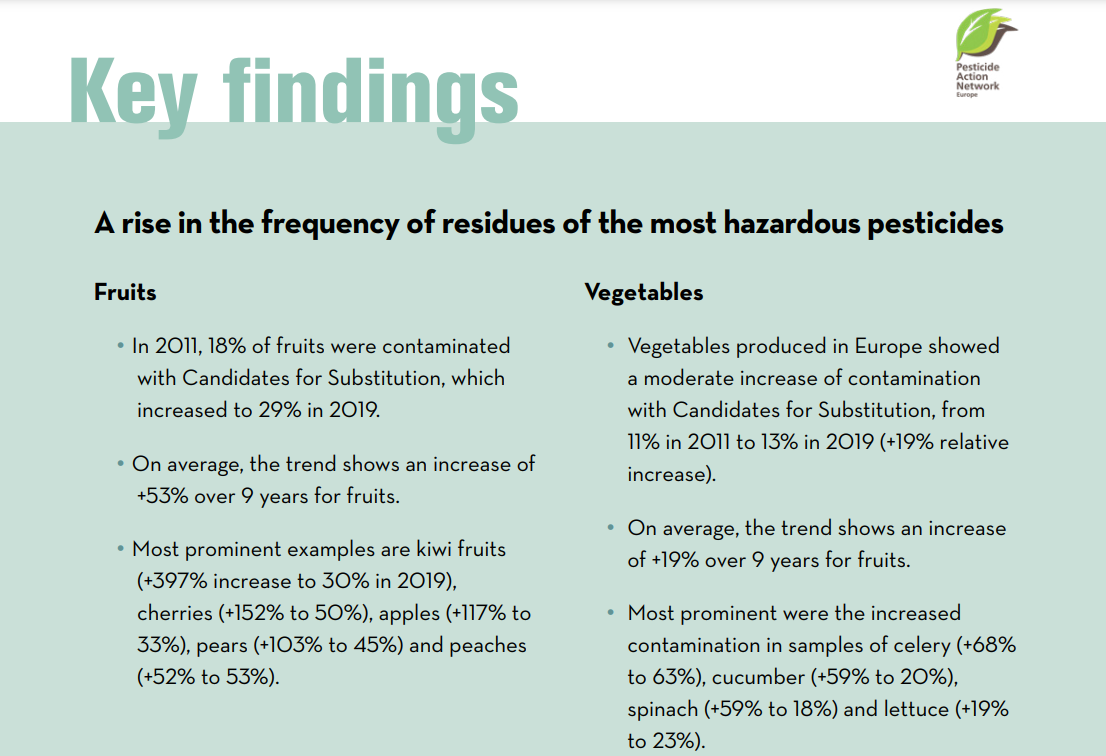 With this campaign, we have undertaken long-term research on the drivers of the persistent presence of these most toxic substances in our environment and our plates.

In our report ‘Pesticide paradise’, we showed that the reason why EU citizens keep being exposed to these most toxic substances is not the absence of alternatives to these most toxic substances but their downgrading during the substitution assessment. This report also documents and makes public the presence and influence of the pesticide industry at all stages of the elaboration of the substitution rules.

We have sent our recommendations to the Commission on how to ensure that the substitution principle finally becomes effective, and that Member States start better protecting citizens and the environment while promoting sustainable crop protection.

In Belgium, we are going to court to challenge the authorisation of two insecticides containing cypermethrin (one of the Toxic12). Belgium has not carried out a comparative assessment of alternatives and is therefore in violation of European substitution rules.