We're at Peak Pesticide and Silent spring is almost here...

Rachel Carson gave the world an important warning in 1962 with the publication of her famous book ‘Silent Spring’. It led to the very necessary ban of DDT and other highly toxic chemicals. But the system didn’t change. We didn't go 'the other way' she describes in the last chapter of her book. We let the pesticide industry define the rules. Other pesticides were introduced, toxic business went on as usual and the use went up. Pesticide reduction is a myth so far, the sales are higher than ever. We’re at Peak Pesticide and Silent Spring is almost here. We know it and many reports and recent publications show it. We urgently need a paradigm change away from pesticides to avert a total biodiversity crisis and create real foodsecurity. We have to strongly reduce pesticide use and start right now. We also expose the myth that we are doing well in the EU. Europe has not reduced pesticide use since 1990. The world has seen an 80% rise in pesticide use since 1990. And Europe is one of the world's leading pesticide exporters.

During the month, many pesticide related events will take place. Organised live and online, by the Pesticide Action Network and partner organisations. PAN Europe presented the report "Pesticide Paradise, how industry and officials protected the most toxic pesticides from a policy push for sustainable farming". This report stresses the urgence to free ourselves from the shackles imposed on us by the chemical industry. They have far too much control over regulations, rules and definition of criteria and indicators. The result we can see in the huge increase in pesticide use worldwide, as shown in the Pesticide Atlas 2022 and in various new report on biodiverity decline. We can only move towards a toxic-free world and give a future to the generations to come if we free ourselves from the suffocating influence of the pesticide industry.

A great tribute to Rachel Carson came on October 10, when the EU Commission formally approved the Save Bees and Farmers citizens initiative. One million official votes by registred EU citizens for restoration of nature and biodiversity, an end to synthetic pesticides and support for farmers to work with nature. This marks the end of an era where the chemical industry called the shots. This time for real! 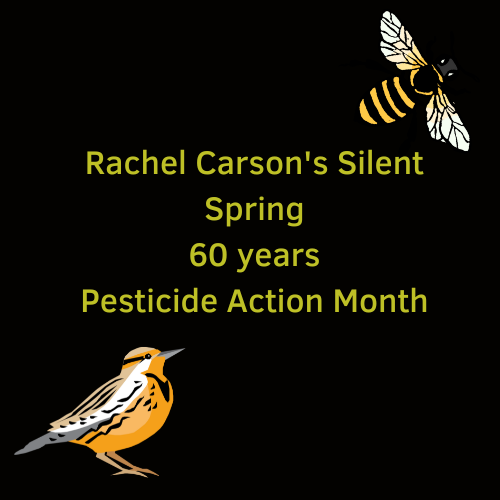 “Can anyone believe it is possible to lay down such a barrage of poisons on the surface of the earth without making it unfit for all life? They should not be called “insecticides’, but “biocides’.”

“Future historians may well be amazed by our distorted sense of proportion. How could intelligent beings seek to control a few unwanted species by a method that contaminated the entire environment and brought the threat of disease and death even to their own kind? Yet this is precisely what we have done.”

“Global biodiversity is in crisis, with extinction rates running at more than 1,000 times natural levels and likely to accelerate. Insects in particular are undergoing catastrophic declines, yet these small creatures are vital to the functioning of ecosystems and to our own survival. A major cause of their decline are the plethora of pesticides applied to farmland, and in our streets and gardens. Rachel Carson would weep is she were alive to see how much worse this has become since she published Silent Spring. We urgently need to move towards truly sustainable farming systems, and bring an end to all uses of pesticides in gardens and towns.”

“We have lost 55% of farmland birds and 39% of grassland butterflies in Europe since 1990 alone. While we see a 300% increase in the volume of pollinator-dependent crops since 1961, we are also seeing a rapid loss of pollination services, especially by wild pollinators. These numbers seem staggering, but scientists estimate the speed of losses to be under-estimated. We know almost nothing about most invertebrates, and we know particularly little about soil organisms. We do know that we are emptying vast tracts of land from life. Through monocultures, urban infrastructure, transport systems, light pollution and pesticides (to name just a few), we generate landscapes that are devoid of life. We combat pests to maximise production, but with them we remove many more organisms that are trying to survive in the lands we have taken over. Even on cow-dung we see no flies or beetles, as deworming agents and antibiotics clean up animals’ stomachs - later on penetrating into the soil and the water we drink. Silent Spring is expanding to a silent life on Earth. Our pesticides, among other means to combat nature, are poisoning us too. Not only the food we eat, but also the land and water, the insects we depend on, and the soil that nourishes our crops. We are risking our future on Earth: we cannot produce on a dead land.”

Our health in danger

"Parkinson's disease is currently the fastest-growing brain disease in the world. There is growing evidence that this serious neurological disease is largely caused by factors present in our environment. These include air pollution and repeated traumatic brain injuries, but also exposure to toxic substances in our environment, such as trichloroethylene and pesticides used in agriculture. The evidence for the relationship between Parkinson's and various pesticides is compelling: in a number of countries, farmers have been shown to have a significantly increased risk of developing the disease, and the same is true for those living near agricultural plots. Moreover, exposure of laboratory animals to various pesticides produces damage in brain regions relevant to Parkinson's, and leads to outwardly observable signs of parkinsonism in these laboratory animals. Fortunately, some of the most suspected pesticides have now been banned. However, the question is whether the currently used pesticides are completely safe; in this respect, there are increasing concerns that the currently used authorisation procedures do not provide sufficient insight into whether or not a specific pesticide increases the risk of Parkinsonism. Moreover, the risk of exposure to so-called cocktails of pesticides has hardly been considered to date, even though this is the reality in our daily lives. Farmers cannot be blamed in this regard, they are complying nicely with existing laws and regulations, and they themselves are the biggest victims as they seem to have the highest risk of Parkinson's. In order to curb the rapid global growth of Parkinson's, urgent steps are needed, including better protection of farmers and others exposed to pesticides, improving authorisation procedures at European level, and looking for alternatives to pesticides."