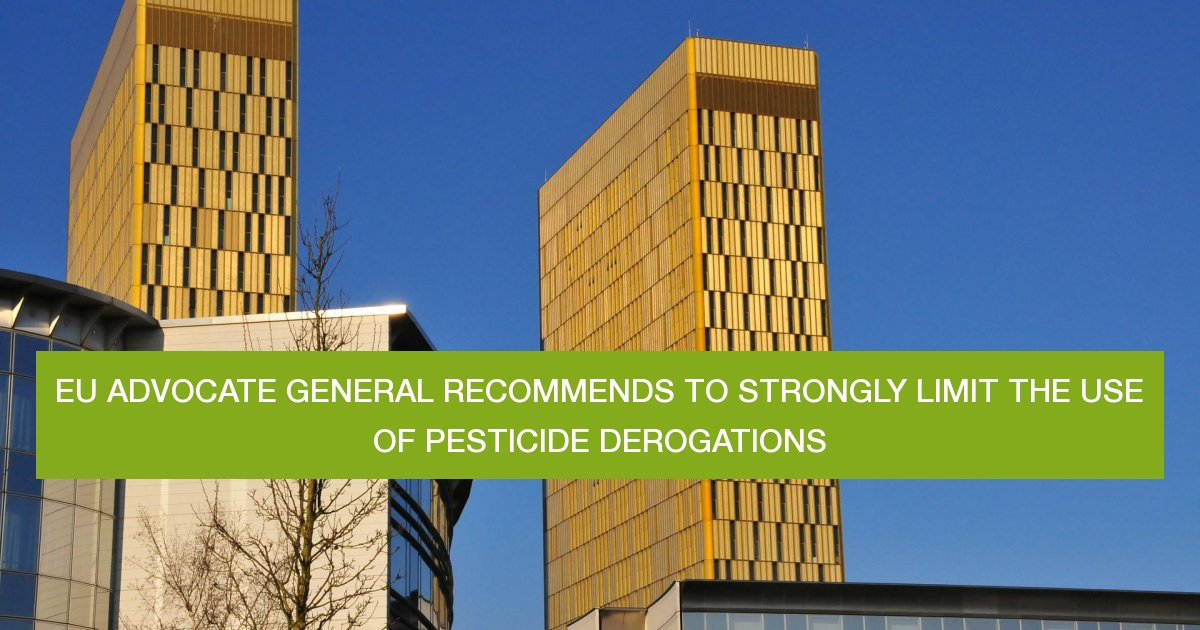 An opinion[1] from the Advocate General of the Court of Justice of the EU advises the Court to define, in a restrictive way, the possibility for Member States to provide pesticide derogations. If followed by the Court, this Opinion would lead to a dramatic reduction in derogations and better protection of citizens' health and the environment. The advice comes in the frame of to legal proceedings initiated by PAN Europe and Nature et Progrès Belgique on pesticide derogations[2].

In essence, the Opinion of the Advocate General published on 8 September recommends the Court to clarify that derogations can be used only exceptionally but not for pests occurring every year. The Opinion further details that these exceptions can only be provided after a thorough evaluation, demonstrating that the benefits of the derogations in terms of agricultural production and food security will significantly outweigh the risks for human health and the environment. Such demonstrations must be carried out independently and with independent data. The Opinion confirms that citizens’ health and the environment must be given priority to agricultural yields.

Martin Dermine, coordinator at PAN Europe said: “If followed by the Court, this Opinion would prevent Member States from abusing the derogation system as they systematically do. Highly toxic pesticides banned for health and environmental reasons are maintained on the market by many Member States through derogations. This goes against the law and this is the reason we went to Court. Derogations are often given to fight common pests that have nothing exceptional and for which less harmful alternative treatments exist”.

Highly toxic substances that are not approved at EU-level or that have been banned because of their excessive toxicity are used on a yearly basis against common pests in many Member States. Neonicotinoids (bee-toxic, banned in 2018), mancozeb (genotoxic, banned in 2020), as well as dichloropropene and chloropicrin (both never approved because highly toxic but receiving derogations in countries like Spain) are just a few examples of the yearly misuses by Member States of the system.

Martin Dermine added: “Many Member States disregard the dramatic consequences on citizens’ health and the environment. Instead of truly evaluating the urgency and the necessity of such derogations, they simply copy/paste industry misleading arguments that they endorse. If a pesticide is banned because of its toxicity, it does not make sense to keep exposing citizens and the environment with it. We highlighted the problem many times to the European Commission, without any effective reaction on their side”.

In 2019, PAN Europe challenged a derogation provided by Belgium for the use of neonicotinoids on sugar beet, despite an EU-wide ban from 2018 to protect pollinators. PAN Europe suggested the Belgian Court to seek preliminary guidance from the Court of Justice of the EU, in order to clarify the conditions under which such derogations can be granted[3].

Following PAN Europe’s suggestion, the Belgian administrative Court submitted 5 preliminary questions[4] to the Court of Justice of the EU. The European Commission, Finland, Greece, France, Belgium and Hungary took part in the legal proceedings. A hearing took place on 17 March 2022[5]. The answers from the Court of Justice to the 5 questions will have an EU-wide impact on the use of derogations.

_PR_EU Advocate General recommends to strongly limit the use of pesticide derogations.pdf
Our campaigns