Food Authority EFSA published this week its pesticide residue monitoring report (data for 2016) on the level of contamination of vegetables and fruit in European food outlets[1]. The percentage of multiple residues in consumed European vegetables and fruit increased again to the extreme high rate of 30,1 % as the graph below shows. Almost 1 in 3 of all fruit/vegetable-products sold in Europe contain more than one pesticide contaminant. The combined toxic effects of these pesticides have not been assessed by the European Authorities. Accumulating scientific evidence shows that pesticides can have synergistic or additive effects when combined, increasing the toxicity of each pesticides alone. Another such scientific study was published this month[2].

The effects of toxic mixtures are still not accounted for in EU safety calculations despite legislation from 2006 demanding EFSA to do so. The continuing claim by EFSA that fruit and vegetables in European supermarkets are safe is not proven, says to Hans Muilerman of the Pesticide Action Network. 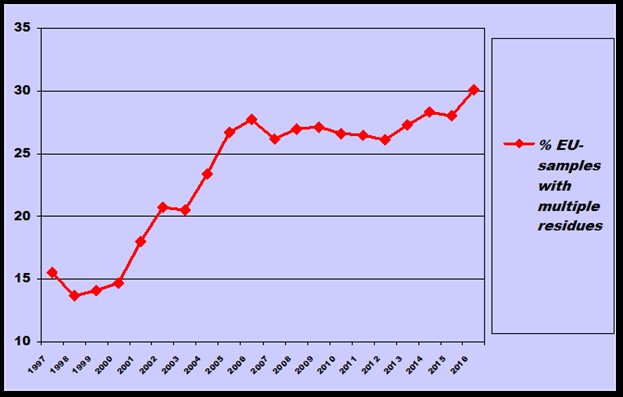 More bad news is the fact that, in 2016, the percentage of vegetables and fruit in European shops without detectable (below analytical detection limit) pesticide residues went down to 50,7%, close to the all-time low in 2007. 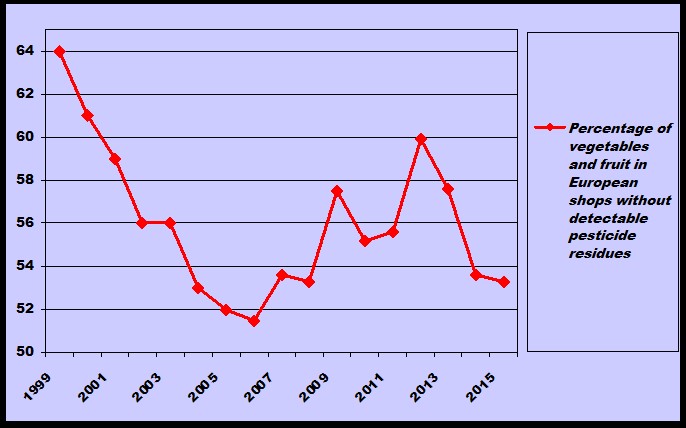 Chlorpyrifos: Chlorpyrifos, an old organophoshate insecticide that is capable of causing serious brain damage to the unborn, is exceeding the legal standard levels for lettuces, peaches and head cabbage (59 exceedances of the MRL, Maximum Residue Level), the highest exceedance for any pesticide analysed in Europe. A stricter standard put in place by EFSA because of grave health concerns is likely the main reason for the exceedances. Chlorpyrifos is also amongst the top-7 pesticides detected most in European food.