Marching for a pesticide free Italy 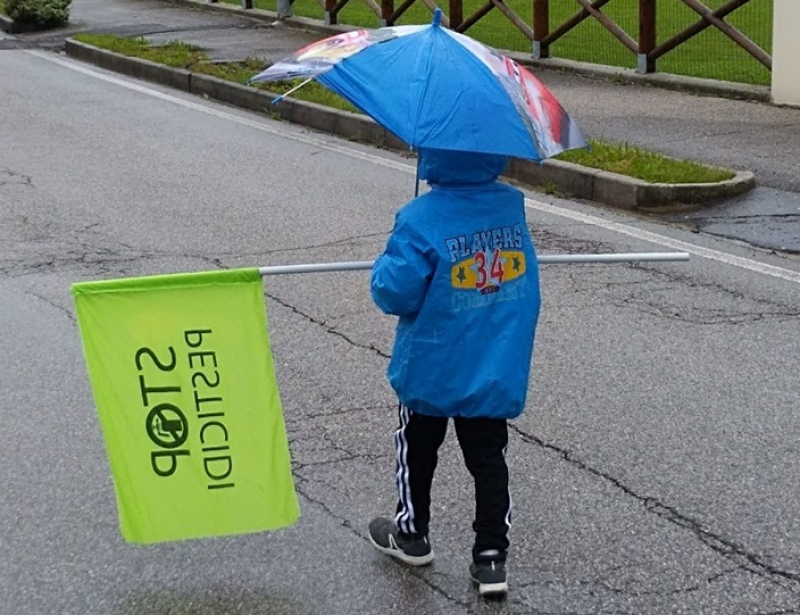 On Sunday 19th of May, despite adverse weather conditions, hundreds of people across the Italian regions of Trentino, Veneto and Emilia Romagna joined peaceful protests in what now, in its third year running, is officially known as the Marcia Stop Pesticidi.

Participants marched against the dependency on toxic chemicals in agriculture, demanding a ban on products that cause damage to health and irreversible changes to ecosystems. In total, 227 associations including PAN Italy,  and civic movements took part in the march, which was held in seven locations across the three regions, namely in Follina (province of Treviso), Verona, Trento, Lago di Caldaro (Bolzano), Codroipo (province of Udine), Potenza Picena and Bologna.

It is hardly surprising that the march occurred in such regions, given these areas are well-known for hosting the most intense vineyard and orchard cultivations in the country. In fact, in the province of Treviso, where the cultivation of vineyards for prosecco is the highest in Italy, PAN Italy has been campaigning that a UNESCO project intending to render the prosecco hills (Conegliano and Valdobbiadene) a World Heritage Site be dropped, due to the damages inflicted upon people’s health and the environment from such intensive cultivations.

Organisers and participants lament the fact that neither the Italian National Action Plan (NAP) nor the EU Directive on the Sustainable Use of Pesticides (SUDP 2009/128/EC) are being respected by the national agriculture Ministry or even local authorities: both call for a reduction in the use of, and dependency on, synthetic pesticides and for a transition toward a more ecological model of agricultural production. Yet, in the case of Prosecco, PAN Italy has been warning that any chance of an agroecological transition was impeded by the fact that demand has skyrocketed over the past decade, drastically adding pressure for more production which in turn led to the substitution of biodiversity-rich meadows with monocultural vineyards.

According to Lipu (the largest Italian bird protection league), 52% of bird species have disappeared in the Pedemontana trevigiana, including goldfinch, lark, quail, plaice, and swallows, also due to pesticide runoff or air drift, and to the elimination of meadows to make way for more vineyards.

Moreover, organisers point to the fact that in the vast majority of areas cultivated with prosecco between April and August/September each year, the population is limited in its right to health and in its right to property because of the pesticide spraying of the vineyards. In many cases, after the treatments, people bordering the vineyards experience breathing difficulties, burning throats, rashes, and even dizziness. Not to mention the disappearance of fireflies, bumblebees and grasshoppers, as well as the decrease in bees, as confirmed by an investigation opened by the Public Prosecutor's Office of Udine.

In total, over two thousand people took part in the march calling for a pesticide free agriculture.

Now all that remains is to await the response of UNESCO officials concerning the nomination of Conegliano and Valdobbiadene as World Heritage Site – we hope that a possible failure of the project, as already occurred last year, might help bring more public attention – and finally some political action - to their cause.

Blog
Agrichemicals: European Commission’s Recurrent Lack of Ambition Stands in the Way of Tackling Farmer’s Dependency on Pesticides!
Growing sugar beets without neonicotinoids? Austrian farmer testimony show it’s possible
Italian Court confirms municipalities are entitled to ban the use of pesticides
Soil is our ally yet we treat it as an enemy : Why are healthy soils key to a sustainable agricultural model ?
PAN Europe takes the issue of pesticide derogations to the Court of Justice of the European Union
END_OF_DOCUMENT_TOKEN_TO_BE_REPLACED