EU Court of Justice: no more derogations for the use of bee-toxic neonicotinoids 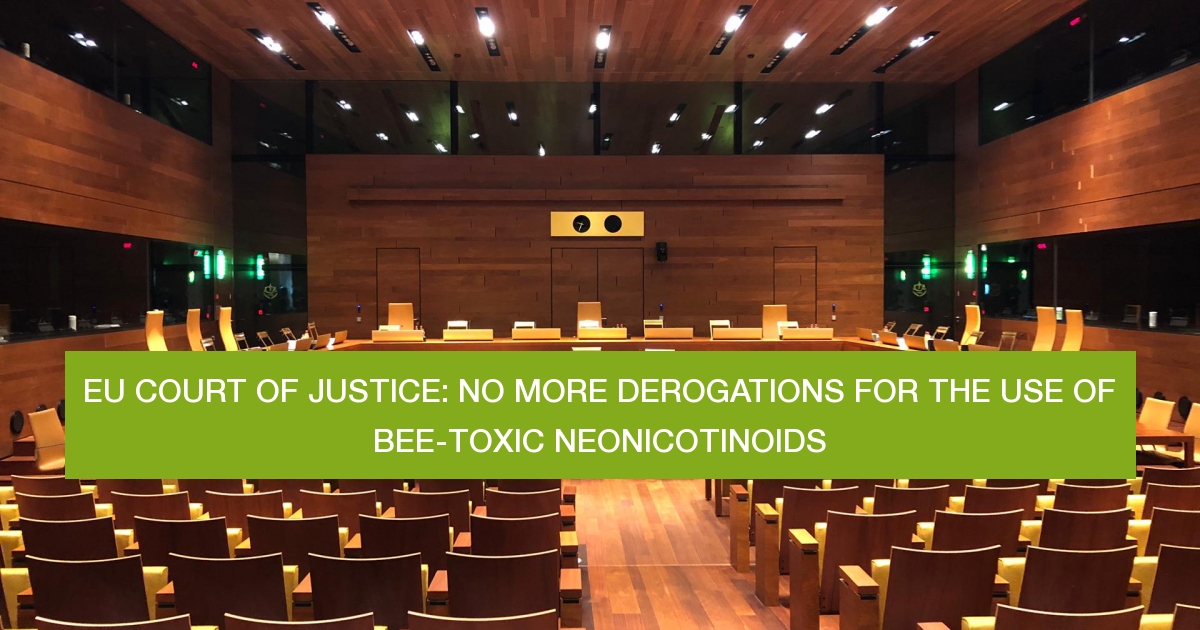 Today, the Court of Justice of the EU (CJEU) published a preliminary ruling on questions posed by the Belgian Administrative Court, following a complaint by PAN Europe, Nature & Progrès Belgium and a Belgian beekeeper. The Court declared that providing derogations for the treatment of seeds with a banned pesticide and their use is not in line with EU law. This ruling puts a stop to almost half the derogations given by Member States to banned pesticides.

Hans Muilerman, a chemical officer at PAN Europe said: "PAN Europe has been fighting this maladministration for many years. This landmark ruling of the EU Court puts an end to 10 years of abuse by Member States, with the blessing of the European Commission. Thanks to our action, the EU environment will become a safer place."

In 2019, Nature & Progrès Belgium, a Belgian individual beekeeper and PAN Europe filed a request for annulment before the Belgian Administrative Court. This followed a derogation given by Belgium to the sugar lobby for the use of bee-toxic neonicotinoid insecticides on sugar beets. The complainants suggested the Belgian Court to submit questions for a preliminary ruling to the CJEU in order to clarify the limits of the law[1] with regards to derogations.

Marc Fichers, Secretary General of Nature & Progrès Belgium said: "This success will have an EU-wide effect, to protect bees and insects across the EU, as well as citizen's health. Derogations with neonicotinoid-treated seeds are now definitely banned. This ruling is relieving and shows the environment counts more than profits from some sugar and pesticide companies!"

The procedure in the Court of Justice of the EU was joined by the European Commission, France, Greece, Hungary and Finland. Belgium, as well as a Belgian pesticide company (SES Vanderhave) and the Belgian sugar lobby also intervened to protect their interests.

Martin Dermine, executive director of PAN Europe added: "During the procedure, it was very shocking to observe that the European Commission kept protecting the abuses of the system by Member States. The Commission supported the provision of derogations for supposedly EU-banned pesticides that are highly toxic to human health and the environment. It was evident that the Commission stood on the side of agribusiness, rather than with citizens' health and the environment! The European Commission's lawyers even told the judges that Member States only give a derogation when no alternative exists, which is opposite to the reality!"

PAN Europe recently published a report[2] on derogations provided by Member States to EU-banned pesticide substances: 236 such derogations were granted over the last 4 years. Neonicotinoids represent nearly half of those (47.5%). The report highlights how Member States fail to assess the necessity for such derogations and their compliance with EU law, favouring agribusiness over the protection of citizens' health and the environment.

Pr. Antoine Bailleux, the NGO's lawyer further commented: "This ruling is a huge step forward for the preservation of biodiversity in Europe. The Court of justice has made it clear that substances prohibited at EU level for health or environmental reasons cannot be introduced through the back door at Member State level, which had become common practice. It has also confirmed that the protection of health and the environment overrides the objective of improving plant production."

Martin Dermine concluded: "Today is a great day for European pollinators and for our environment. The EU pesticide law gives priority to citizens' health and the environment but its implementation at EU- and national levels is poor. This verdict is a reminder that administrations and politicians are bound to the law, not to the interests of the pesticide industry, or industrial agricultural lobbies."

Neonicotinoid insecticides were approved in the EU in the 90's. After 20 years of harm on EU insect populations, the European Commission and Member States partly restricted their use in 2013, to crops that are not attractive to pollinators. A series of EU Member States immediately issued derogations to keep using them despite of the ban[3]. In 2018, following the ban on all outdoor uses, the number of derogations even increased significantly.

Read the ruling (available in all EU languages)

“The Court also stresses the obligation of all Member States to take all necessary measures to promote low pesticide-input pest control, giving priority to non-chemical methods wherever possible. Such an obligation implies that professional users of professional pesticide users switch to practices and products available with the lowest risk to human health and the environment to address a pest problem.”