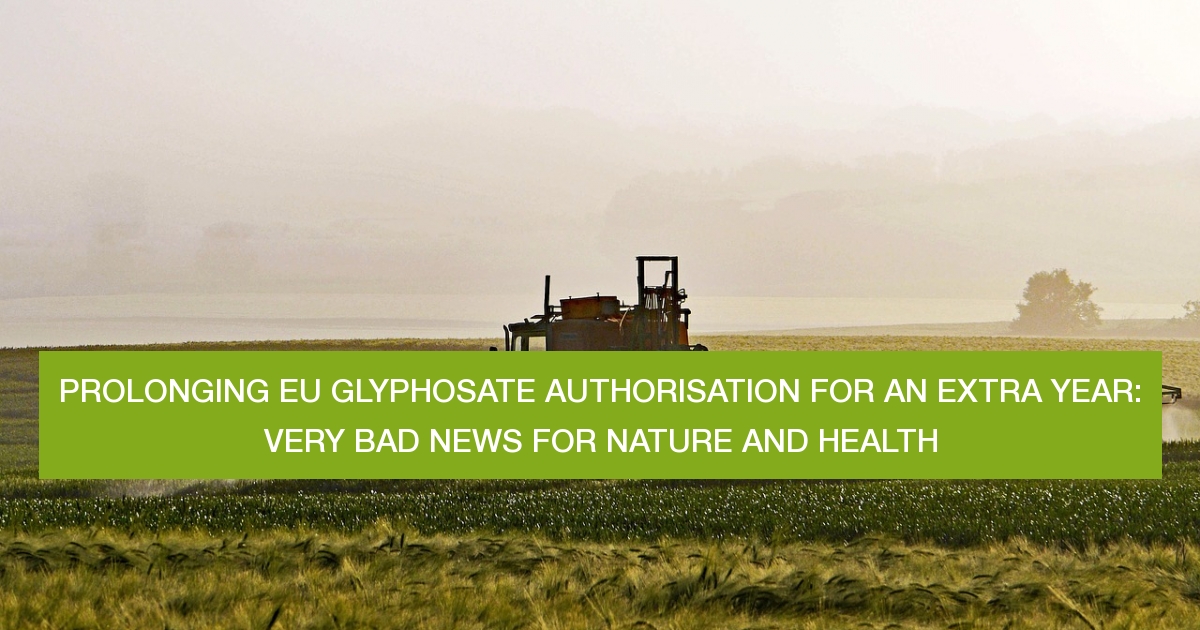 On 13th or 14 of October, EU Member States will discuss to extend the authorization of glyphosate for an extra year during this week SCoPAFF meeting[1]. PAN Europe is outraged. There is more than enough new scientific evidence to expose the unacceptable risk of current glyphosate use to human health and to the environment, This should be enough for EFSA and the responsible Member State Authorities to ban glyphosate right away.

Gergely Simon, chemical officer at PAN Europe says: “It is unacceptable that Member State representatives plan to give a blank check for an extra year of using glyphosate in the EU. There is enough evidence available about the human- and ecotoxicological effects of glyphosate for an immediate complete ban. The prolongation means another year of exposure to this herbicide which is very toxic to health and biodiversity. Commission and Member States  should finally take independent science into consideration as required by the Regulation (EC 1107/2009).”

Glyphosate is currently approved in the EU until 15 December 2022. A 5 years authorisation was granted in November 2017, instead of the proposed 15 years. Many voices proposed a ban already in 2017.

From the information PAN received, Member States will vote in favor of the prolongation of glyphosate. When EFSA announced on the 10th of May this year the postponement of its conclusions on glyphosate by one year, it was predictable that the Commission would propose such a prolongation. The postponement was criticised by PAN, as the EFSA has received enough evidence to quickly produce a statement on the unacceptable risk posed to people's health and the environment.

Genotoxic and neurotoxic: Since glyphosate was classified by the International Agency for the Research on Cancer (IARC) as “probably carcinogenic to humans” several independent studies reveal the genotoxicity risk of glyphosate. There is more: recently two reviews were published regarding the neurotoxicological properties of the herbicide (Moser et al. 2022; Costas-Ferreira et al. 2022).

Gergely Simon concludes: “Europeans also demand the end of glyphosate and harmful pesticides. In 2017, a successful European Citizens Initiative asked the European Commission and Member States to ban glyphosate. A recent successful citizens initiative is asking for the phasing out of 80% of the use of synthetic pesticides by 2030 and 100% by 2035. Both the adopted European Biodiversity and the Farm to Fork Strategy oblige Europe to cut the use of chemical pesticides in half by 2030. These objectives cannot be achieved without the phasing out of the most widely used pesticide of Europe.”

Member State representatives in the SCoPAFF will decide on a renewal of glyphosate's EU approval only at the end of 2023 after EFSA’s conclusion on glyphosate.