EFSA announces it postpones its conclusions on glyphosate by one year: Citizens' health and the environment at risk! 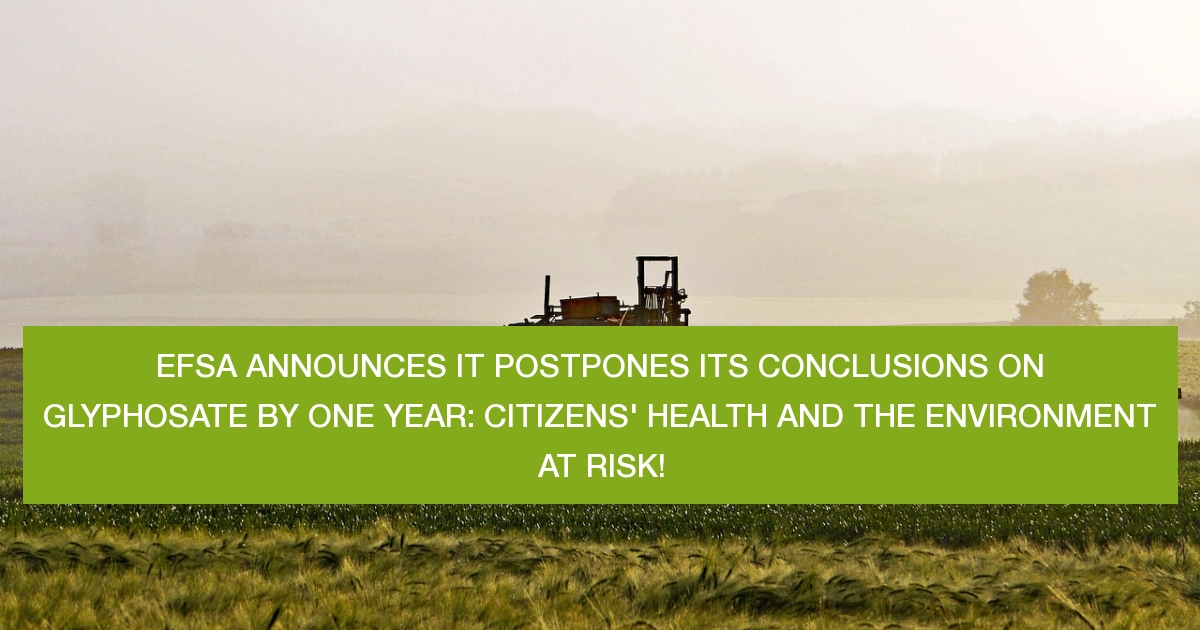 On May 10th EFSA announced the postponement of its Scientific opinion on the re-approval of glyphosate.  In practice, this means the European Commission and Member States might try to decide for a 1-year prolongation of the herbicide. PAN Europe denounces the mismanagement of the file by EFSA and objects to any prolongation of the approval.

Gergely Simon, a chemical officer at PAN Europe said: “EFSA received far enough evidence to quickly produce a statement on the unacceptable risk posed to peoples' health and the environment. Independent science is clear: glyphosate is genotoxic, a probable carcinogen and has unacceptable negative effects on the environment".

Originally, the EFSA was meant to publish its conclusions over the summer and the European Commission and Member States were supposed to decide on the renewal before the end of 2022.

EFSA claims that the delay is linked to the fact, that they received “far more scientific data than are usually available for such assessments”. Martin Dermine, a policy officer at PAN Europe said "EFSA had all information in hand since Fall 2021. Postponing its conclusions by one year shortly before the expected date of publication of its conclusions gives an impression of a bad management of the file".

The industry provided its renewal dossier in 2019 and a public consultation was closed in Fall 2021. Martin Dermine added: "We hope EFSA will take the opportunity to finally give importance to the breadth of independent science, contrary to what they did back in 2017, giving then priority to industry data".

Gergely Simon concludes: "There is no way the Commission can give a blank check for an extra year of using glyphosate in the EU. In 2017, a successful European Citizens Initiative asked the European Commission and Member States to ban glyphosate. In 2021, another victorious citizens initiative asked to phase out pesticides by 2035. Cutting in pesticides is also a conclusion of the Conference for the Future of the EU. To be credible, it is more than time the European Commission moves away from agribusiness and listens to both its citizens and what independent scientists tell them! ”.

Glyphosate has been classified by the International Agency for the Research on Cancer (IARC) as “probably carcinogenic to humans” (Group 2A) in March 2015 and further studies since supported the cancer risk (Portier, 2020). The studies by industry that led to the re-authorisation of glyphosate have long been secret but had to be revealed after a decision by the European Court of Justice. An independent review by cancer experts Knassmüller and Avertisyan shows that the 2017 EU decision is based on a faulty analysis. Most industry studies are not reliable and independent studies show that glyphosate is genotoxic. Glyphosate should have been banned in 2017.

EFSA announces it postpones its conclusions on glyphosate by one year.pdf
Our campaigns