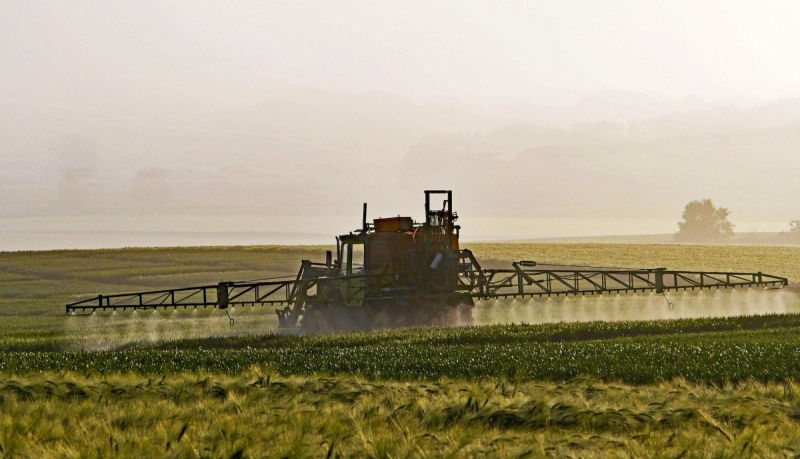 During the Covid-19 lock-down, the French Agriculture Ministry authorizes the reduction of the pesticide bufferstrips near houses without public consultation.

Spring is definitely back, which means a relaunch of agricultural activities all over Europe. Unfortunately, this also represents new risks for the population lock-downed in rural areas due to the COVID-19 pandemic.

In France, the come-back of field activities is also a synonym of an increasing air pollution due to particles releases from fertilizers decomposition. Air Breizh, the agency in charge of controlling air quality in Brittany, reported high concentration of particles in the region at the end of March, and warned against the possible detrimental health consequences for the population, especially the most vulnerable persons. Indeed, air pollution has been recognized as a factor of increased sensibility to infections, as particles irritates mucous membranes and can ease the entry into the organism for viruses. But particles are not the only issues within rural areas: pesticides use is also increasing during spring time.

The French measures aimed at protecting the population from pesticides were already weak : non-treated areas ranging from 5m for low crops to 10m for high crops have been established near houses, but these can be reduced if a charter is established between farmers and inhabitants after a public consultation. However, the public consultation around those projects do not properly involve citizens living in the surroundings, as reported by our French member, Générations Futures. Thus, the actual utility of the charter, but also of the whole measure, is called into question.

Still, those measures are being further watered down: on April 3rd and until June 30th, the French Agriculture Ministry authorized farmers engaged in a charter project and equipped with drift-reduction tools to spray 3 meters for low-height crops and 5 meters for high-height crops away from houses, despite the mandatory public consultation regarding those charters being suspended because of the pandemic.

Pesticides represent an additional risk for lock-downed population: as pointed out by the French Health Institute for medical research (Inserm), pesticides can disturb the immune system, which can increase people’s vulnerability in the case of a viral infection.

During this pandemic, pesticides remain a crucial public health issue and such a decision in those extraordinary times is a step in the wrong direction when it comes to protecting the population.

The non-treated bufferstrips, established since December, were the object of a fierce opposition from the French federation of farmer’s union. According to Reporterre, back in early February, the government already conceded a reduction of the spraying distance down to 3m for low-height crops and 5 meters for high-height crops if the farmers were engaged in a project of charter under public consultation, meaning without the consultation being brought to its term.

A mayor movement for change

Last spring, Daniel Cueff, mayor of Langouët, a village in Ille-et-Vilaine (Brittany), passed a decree establishing 150-meters of non-sprayed areas in fields next to houses in order to protect citizens from exposure to pesticide drifts. This decision fed the lively debate on pesticides ongoing in France already for several  years, and echoed the dissolution of the 2017 arrêté on the authorization and commercialization of pesticides: welcoming the plea of two NGOs, the Conseil d’Etat (State Council) cancelled the arreté on the basis that it did not respect certain national and European legal dispositions (including Article 11 and 12 of the 2009 EU Directive on the Sustainable Use of Pesticides) and did not protect the environment and public health sufficiently[1].

Following this first example, a movement among mayors formed: more than a hundred of them took the same decision, showing solidarity with Mayor Cueff and willingness to protect their citizens’ health. On the other side, conventional farmers’ unions strongly criticized those decisions, arguing these represented a new instance of “agribashing” and that this would entail a loss of agricultural soil, leading to a decrease in production, without mentioning that cultivating those areas will remain authorized, thus will not be affected by the ban on pesticide spraying.

However, as the decision to establish non-sprayed areas around towns is a national - and not a municipal - competence, most of the decrees were annulled before administrative courts. Nevertheless, two were safeguarded, as the administrative judges considered that since the government did not take any serious measure to protect public health, the mayors were allowed to act, a fact which set an encouraging legal precedent for the mayors who are still dealing with administrative trials.

During this “wave of decrees”, the government proposed a new version of the arrêté establishing nation-wide non-spray areas of 5m for low culture (vegetables) and 10m for high culture (orchards, vineyards, etc.) with 3m derogations in some cases, based on the recommendations made by the National Health Public Agency (Anses). Unfortunately, those distances are far from being sufficient, since synthetic pesticides are highly volatile and can drift through air, especially if meteorological conditions change. The Anses itself recognized that the methodology to assess the risk of pesticide exposure (as set out in the 2014 EFSA Guidance of the assessment of exposure for Operators, Workers, Residents and Bystanders in risk assessment for plant protection Products) used to establish those recommended distances was limited: indeed, the methodology did not include the assessment of any exposure at a distance further than 10 meters. The idea of creating local charters accompanied the legal proposition, in the hope of gathering different actors (farmers, municipalities, NGOs, citizens, etc.) to discuss non-sprayed zones distances, good farming practices and draft local regulation, to be approved and supervised by the department prefect.

This was followed by a public consultation that lasted until the end of October 2019 and gathered around 50 000 contributions. It seems however hard to believe those contributions were taken into account: on December 20th 2019, the government released the new version of the “arrêté” and kept the above-mentioned distances.[2] A 20m buffer strip was added but this only concerns the most hazardous substances for human health: the list published by the government represents only 0,3% of the approved substances in France. Furthermore, the list is supposed to contain carcinogenic substances but does not include glyphosate. The joint decree establishes the possibility to create local charters as proposed before but, unfortunately, this tool is likely to be used in order to set derogations i.e. 3m buffers trips[3]. Besides, as our French member Generations Futures explained, past experimentations of departmental charter redaction were highly unsatisfactory, as most of them did not include citizens (or only represented by mayors), environmental NGOs or even organic farmers (the only farmers’ union present being the FNSEA – the National Federation of Farmers Union, COPA-COGECA’s French member)[4]. Following the publication of those two decisions in late December, new court cases are in preparation according to Generations Futures.

A blurred message from France, between agroecological discourse and continuous support of intensive farming

Finally, the French government decided to allocate €25 million to accompany farmers in their adaptation to the new regulation. Unfortunately, this budget is unlikely to drive the necessary agro-ecological transition: according to the government, the resources raised will finance the purchase of more “effective” spraying equipment instead of finally financing the change of practice farmers need in order to reduce their pesticides dependency.[5]

This decision is a new chapter in the tricky pesticide file for France, in a context where the government itself recognized its ten-year “Ecophyto” plan and the subsequent plans (which were part of the 2009 EU SUD Directive implementation) failed to effectively reduce pesticide use, and recently announced that pesticide sales increased by 24% in 2018. If France is willing to make its actions match its environmental and public health ambitions, then it should swiftly put in place stricter regulation and effectively finance the uptake by farmers of good agroecological practices are key, as well as show political courage at the European scale by defending those practices in the context of the post 2020 Common Agricultural Policy negotiations.

Blog
PAN Europe takes the issue of pesticide derogations to the Court of Justice of the European Union
Is German EU Presidency about to Break the European Green Deal?
We are looking for a Communication and Policy Intern!
Pesticides keep killing bees in the EU
Banning active substances and plant-protection products in Member-States: is EU law a “barrier” to national prohibitions?
END_OF_DOCUMENT_TOKEN_TO_BE_REPLACED