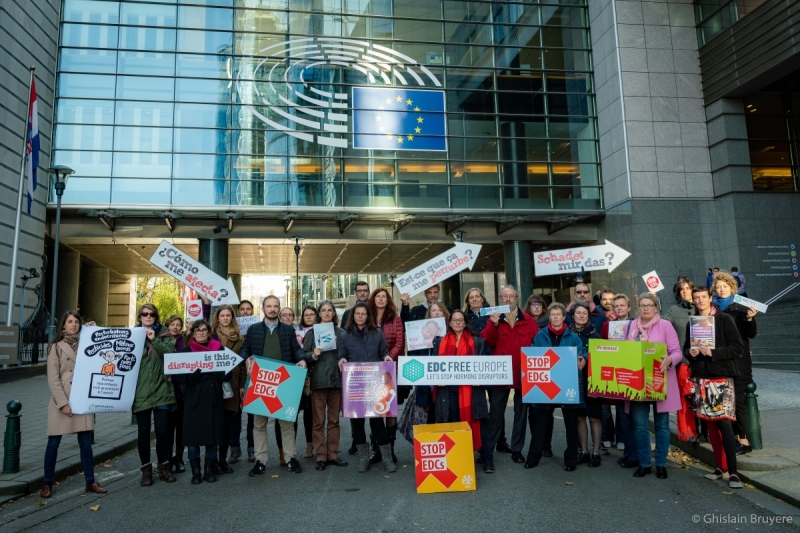 As PAN Europe, we’re very disappointed with the lack of commitment in the recent Commission’s communication “Towards a comprehensive European Union framework on endocrine disruptors” as it fails to take any immediate action to protect human health and the environment from harm caused by these chemicals, many of them pesticides. For this reason, we have joined forces with our ally NGOs and together we’re reaching out to policy makers to express our concerns.

In line with the 7th Environmental Protection Programme we were expecting for an updated Union Strategy on EDs, with specific goals to phase out the use of ED chemicals (EDCs) as soon as possible and promote non-toxic alternatives. Instead, the Commission launched a plan to do a fitness check on the various ED policies [see previous blog] before any action is taken.

A fitness check at this moment, not only delays further taking any drastic measure to start eliminating EDCs from our daily lives, but it’s also totally premature since the EU policies on EDCs have hardly been implemented. The criteria to regulate biocides and pesticides with endocrine disrupting properties were put into force in July and November 2018, respectively- the later just few days after the Commission published its communication!

Last week the horizon2020 EDC-MIxRisk project presented its results in Brussels revealing how most humans are exposed to more than 40 ED chemicals while still in the womb (through environmentally exposed mothers) and how this is linked to adverse effects on brain development leading to learning disabilities and impaired behaviour later in life, among other adverse effects. EDC mixture may also lead to metabolic adverse effects such as lipid accumulation and obesity. These kind of adverse effects on metabolism are not even regulated by EU policies yet. Therefore, we urgently need to start identifying EDs and if necessary, substituting them with safer alternatives.

But we’re not the only ones concerned about the Commission’s Communication.

The EU Environment Ministers at the European Council meeting on the 5th of March also expressed their concerns about the lack of measures to phase out use of EDCs in Europe by the Commission.

A recent scientific study commissioned by the European Parliament with title “Endocrine Disruptors: from Scientific Evidence to Human Health Protection” highlights that we know enough on the adverse effects of certain EDs to start regulating them.

“The European Union should develop a set of trans-sectorial and harmonized regulations to minimize human and environmental exposure to endocrine disruptors” is one of the study’s recommendations.

The Endocrine Society also expressed its concerns that the European Commission communication will fall short in protecting the public from EDC exposure.

The civil society organizations, being increasingly concerned on exposure to synthetic chemicals, have also expressed their disappointment to the Commission’s communication as it lacks specific measures to protect human and the environment from EDCs exposure.

During the past week we’re reaching out to Members of the European Parliament to stand by the Citizens’ side and criticize the Communication for lacking commitment and specific targets to phase out EDCs, including pesticides.

Creating a delay to regulate these chemicals at this stage only has short-term benefits for the market and leaves society at great risk. As European citizens we expect that the priority of our policy makers is to protect us, our children, our environment and its ecosystems from all the harm -that we’ve known for so many years- that EDCs cause.

Blog
Agrichemicals: European Commission’s Recurrent Lack of Ambition Stands in the Way of Tackling Farmer’s Dependency on Pesticides!
Growing sugar beets without neonicotinoids? Austrian farmer testimony show it’s possible
Italian Court confirms municipalities are entitled to ban the use of pesticides
Soil is our ally yet we treat it as an enemy : Why are healthy soils key to a sustainable agricultural model ?
PAN Europe takes the issue of pesticide derogations to the Court of Justice of the European Union
END_OF_DOCUMENT_TOKEN_TO_BE_REPLACED