Why are our EU regulators so reluctant to protect us from hormone disruptors? 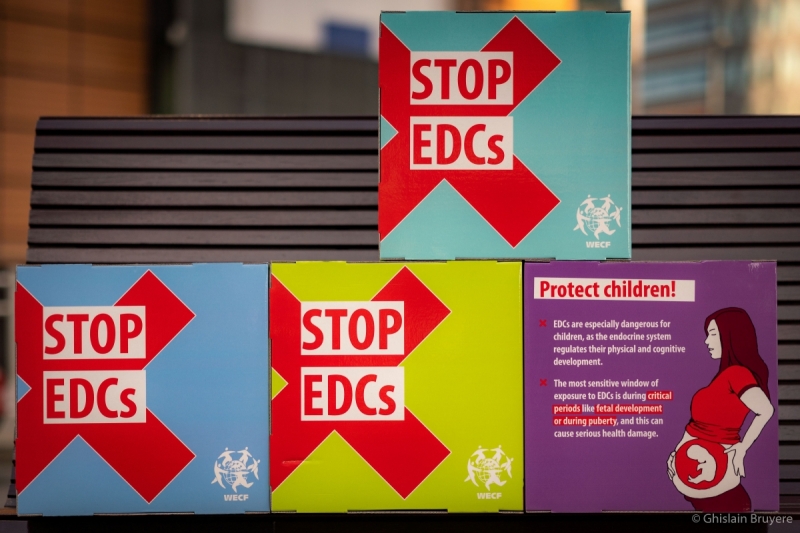 Europeans were once again disappointed this month from the lack of commitment of European policy makers to phase out the use of endocrine disrupting chemicals (EDCs), set clear targets and increase the level of protection of citizens’ and environmental health. Instead of concrete actions to phase out EDCs, the European Commission delivered a communication, that aims to confirm its commitment to protecting citizens and the environment from hazardous chemicals, however without calling to ban a single such chemical. “This is an empty document” states PAN Europe.

Europe the first to address EDCs

For decades, world’s top scientists have been sending out alarming messages that many of the chemicals we’re fabricating and we’re exposed to in our days interfere with the normal function of our hormonal (endocrine) system, which may explain the rise of several endocrine-related diseases of our days.

In progressive Europe, we were the first to adopt policy actions to address the scientific and public concerns. After all this is about the protection of our children’s health, our environment and our future.

The number of European and international research programs that focus on endocrine disruption have increased and so has our understanding on the harm caused by these chemical. The harm that remains to be regulated is not the acute harm from high toxic exposures but the harm that results from prolonged exposures at low level, especially during the periods of early-life development when organs are still forming.

Even though the scientific evidence on endocrine disruption in humans, animals and wildlife is pilling up, the establishment of an effective European Policy to phase out the manufacture and use of such chemicals from our daily lives is yet to be made.

This was also the underlying message of the endocrine scientist experts from the Endocrine Society and European Society of Endocrinology at last Monday’s briefing (November 19th) at the European Parliament. The meeting was co-hosted by MEP Eric Andrieu, Chair of the Parliamentary Special Committee on the Union’s authorisation procedure for pesticides (PEST), a committee that was set up following the citizens concerns on exposure to dangerous pesticides, including endocrine disruptors. The PEST draft report was published in September and addresses, among others, the need to strengthen the regulation of endocrine disrupting pesticide substances.

The meeting took place days after the publication of Commission’s Communication “Towards a comprehensive European Union framework on endocrine disruptors”. A long due Communication and an extremely disappointing substitute of the expected Union Strategy for non-toxic environment, that the Commission had to deliver 2018, in line with the 7th Environmental Action Programme[1] of the European Parliament and the Council. The Strategy should be conductive to innovation and development of alternatives and non-chemical solutions to ensure, among others, the minimization of exposure to endocrine disruptors and appropriate regulatory approaches to address combination effects of chemicals.

During the Parliamentary briefing the Endocrinology experts -representing thousands of researchers from Europe and across the world, involved in hundreds of thousands scientific research studies in the field of endocrinology- expressed their disappointment on Commission’s recent communication. As mentioned in Endocrine Society’s press release, the Commissions’ Communication “fails to address the urgent need to protect children and other vulnerable populations from EDC exposure” as it “did not address the need to set targets for identifying harmful EDCs and replacing them with safer alternatives”.

“We need to act, we need better public health protection”, emphasized at the end of its presentation Professor Nadal, on the behalf of the endocrine society, “we have enough scientific data to start regulating the use of certain substances; the communication document does not address any of the necessary policy actions or timeline to do so”. Professor Toppari, presented the results of 20-years research in Northern Europe on the decline of sperm quality in men, and the increase of sex organ deformities and testicular cancer. “Unfortunately, only 1% of the chemicals used on the market have been tested for endocrine disrupting properties”, he added to emphasize the urgent need to start testing all chemicals on the market for the full spectrum of such properties.

Those of us who have been following closely the developments of the European policy on Endocrine Disruptors and were expecting the strategy, we were astonished by Commission’s double manoeuvre. Not only the Commission presented on November 7th a ‘communication’ document, instead of a concrete Union Strategy with zero actual commitment to ban endocrine disrupting substances that come in contact with humans and the environment; it even called for a Fitness Check to assess whether relevant EU legislation on endocrine disruptors delivers its overall objective to protect human health and the environment. This time delay and spending of public resources could be used to increase the level of protection from EDCs, by creating legal obligations to phase out the use of such chemicals. Unlike the endocrinology experts, the Commission gives the impression that people and the environment in Europe are already protected from these chemicals, which is not true.

The European Coalition of NGOs EDC free Europe also sent out a similar message emphasizing that “the Communication lacks concrete measures”, without such measures it is impossible to phase out the use of endocrine disrupting chemicals, reduce exposure and protect human and the environment from potential harm caused by these chemicals.

Hans Muilerman PAN Europe’s Chemicals Officer adds “According to EU law EDCs are considered a hazard toward human and environmental health and contact with humans should be excluded or be kept minimal (negligible).” However, the Commission’s communication gives the impression that some exposure to EDCs might be safe even though many scientists consider that for pregnant women, infants and children, no detectable level of exposure to EDCs can be considered safe[2]. And for the environment, the effects may be irreversible.

France, who adopted a new much more ambitious national strategy for EDCs in May 2018, also urged the Commission to strengthen its ‘Strategy’. The Ministry, in its press release, calls upon the Commission to revise its assessment process and increase the “independence” of the studies and the national experts involved in the procedure, across the EU. The Ministry also calls for “homogenous awareness” to take these substances into account in all EU legislations.

Delays: protecting the market at human and environmental health cost

Pesticides Regulation (EC 1107/2009), followed by the Biocides regulation (EU 528/2012) were the first pieces of EU law to set clear cut-off criteria for EDCs, as they do with CMR substances (carcinogenic, mutagenic and toxic to reproduction). These regulations are based on the precautionary principle and aim to increase the level of protection of human, animal and environment by banning and restricting the use of hazardous chemicals. Therefore, if a substance is an EDC for human and/or non-target organisms, it should not be authorised.

The Regulation called to ban EDCs but without having a set of criteria to identify which substances can actually disrupt the hormonal system and the Commission had to present a set of scientific criteria at the end of 2013. In the meantime, the chemicals industry started its aggressive but very successful lobbying and the Commission, instead of presenting the scientific criteria that the Environment Directorate had prepared, it called for an impact assessment on four potential criteria options, that seemed more political than scientific. The impact assessment and the set of draft criteria were published in 2016 -2,5 years passed the deadline- but the criteria had to be modified several times to be accepted. Experts from the endocrine society, certain Member States and civil society organisations, had expressed their concerns on the criteria. The criteria are asking to identify the mode of action through which an endocrine disruption is caused -an industry’s request- which is not always possible with our current knowledge on the function of the endocrine system. After all, does it really matter the mechanism through which an adverse effect is cause, since the aim of the EU law is to protect against adverse effects, even if the mode of action is still unclear?

“The pesticide industry is a very profitable business” reminds us Angeliki Lysimachou, Science Policy officer of PAN Europe. “These delays protect the short-term income of agri-business at a great cost not only for human, animal and environmental health but also for the future of agriculture, as these chemicals increase pesticide resistance, decrease soil fertility and impact ecosystem services”.

Now it is in the hands of the European Parliament and the Council to react to this “empty” communication by the Commission, and demand a clear Union strategy instead that will successfully phase out hormone disruptors, that interfere with the health of our children and our future generations.

Blog
Agrichemicals: European Commission’s Recurrent Lack of Ambition Stands in the Way of Tackling Farmer’s Dependency on Pesticides!
Growing sugar beets without neonicotinoids? Austrian farmer testimony show it’s possible
Italian Court confirms municipalities are entitled to ban the use of pesticides
Soil is our ally yet we treat it as an enemy : Why are healthy soils key to a sustainable agricultural model ?
PAN Europe takes the issue of pesticide derogations to the Court of Justice of the European Union
END_OF_DOCUMENT_TOKEN_TO_BE_REPLACED