PAN Europe carried out an investigation to find out whether pesticides banned in the EU [according to 1107/2009 and PIC legislation1] are detected in food sold on the EU market, using the EU official food pesticide residue monitoring data.

The REFIT evaluation is a big disappointment. Commission claims that the pesticide Regulation has been effective to fulfil its goals “to a large extend”. However, no evidence is provided to assess whether the purpose of the Regulation to ensure a high level of protection of both human and animal health and the environment has been fulfilled. The claim is unsubstantiated [see point 1, ‘Pesticide policy- effective?’].

Integrated Pest Management means moving away from killing towards managing pest populations. Integrated Pest Management (IPM), if applied correctly, is a sustainable way to protect crops based on applying good agronomic practices to enhance plant resilience, the forecasting and monitoring of pest population development and the use of mechanical as well as biological alternatives to synthetic pesticides. Synthetic pesticides are then only used as a last resort in pest control.

Identification of endocrine disrupting pesticides: Trapped in a vicious circle

The current EU policy to test if a pesticide is an endocrine disruptor (altering the function of human and animal hormonal system) is far from being implemented. Endocrine disruption is a serious health concern that could lead to reproductive effects, cancer, brain damage and a range of other diseases. PAN Europe’s survey on the approval decisions of 33 pesticide active substances in Europe revealed that in 31 cases no relevant testing -specific to assess endocrine disruption- was requested from industry. 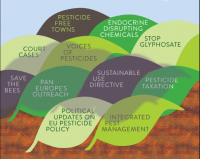 In 2008 EU Commission health service DG SANTE started its notorious program to allow 88 banned pesticides acces to the market again, the so-called “Resubmission". Many of the most toxic pesticides such as Metam-sodium, Malathion,  Bromuconazole, Bifenthrin, Prochloraz, etc. were approved mainly on political grounds and because of the threat of massive industry-sponsored court cases. 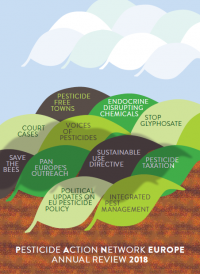