Toxicity of pesticide co-formulants: EU Commission proposes rules that will leave health and the environment unprotected 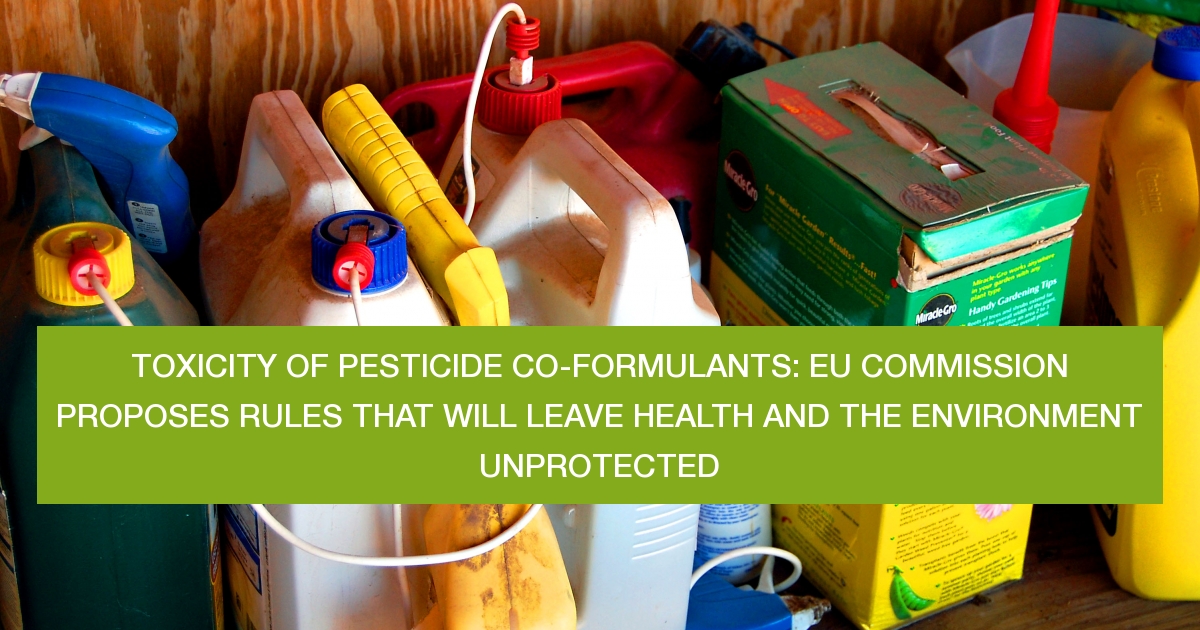 The European Commission has just published a proposal for a Commission implementing regulation on co-formulants[1]. PAN Europe considers that the current proposal is not in line with EU law, and will not enable a proper protection of citizens and the environment against these - yet non-regulated - chemicals. The Commission is trying to transfer the burden of assessing their toxicity onto the shoulders of Member States, while not ensuring they receive sufficient information from the industry to carry out the work. PAN Europe considers this proposal will lead to chaos among Member States and to more legal uncertainty. Today, PAN Europe publishes a Position Paper on co-formulants with solutions to strongly improve the proposal.

Martin Dermine, PAN Europe executive director said: “Citizens and the environment are equally exposed to co-formulants as any other compound of pesticide formulations. Science has shown they can be very harmful to our health, as well as to wildlife. The current Commission proposal is insufficient to comply with EU law and not protective enough.”

Pesticides are composed of one or more active substances (e.g. glyphosate) and co-formulants that increase their efficiency. Co-formulants may compose up to more than 50% of the full pesticide formulation sprayed into the environment. For a majority of these chemicals, regulators have no information on their impact on citizens’ health and the environment even though they are equally exposed.

According to pesticide Regulation(EU)1107/2009, the European Commission is supposed to regulate co-formulants since 2016. As for active substances, they shall have “no harmful effect on human and animal health and no unacceptable effect on the environment”. In its proposal, the Commission nevertheless suggests a less strict risk assessment, without any obligation for the industry to provide the necessary toxicity data that would enable the EU and Member States to properly assess the toxicity of the product.

Martin Dermine adds: “The European Commission proposal shows DG Sante does everything to avoid demanding new toxicity data to the industry. This is not in line with the objectives of the European Green Deal. Furthermore, the proposal will inevitably lead to chaos: they ask the 27 Member States to carry 27 different risk assessments for the same substances, without obliging the industry to provide them with the needed toxicological data.”

In the past, the EU Commission and Member States banned a whole family of co-formulants (POE-tallow amines) that were used for decades but were found to be toxic to humans and the environment, by independent research. Newer scientific data show they can harm people’s health or biodiversity, such as bees[2]. PAN Europe considers this clearly shows that up to now, Member States received insufficient data to regulate these chemicals and more data is needed from the industry.

Martin Dermine concludes: “A recent EFSA analysis[3] identified that a series of declared co-formulants are classified as carcinogenic 1B or toxic to reproduction 1B. The EU law prohibits the exposure of citizens and the environment to such chemicals, why do Member States approve them? It is more than time to have a harmonised regulation of these chemicals at EU-level!”

In its Position Paper, PAN Europe advocates for a harmonised and centralised approach, where the European Food Safety Authority would be required to carry out the risk assessment, based on data requirements like those from active substances.