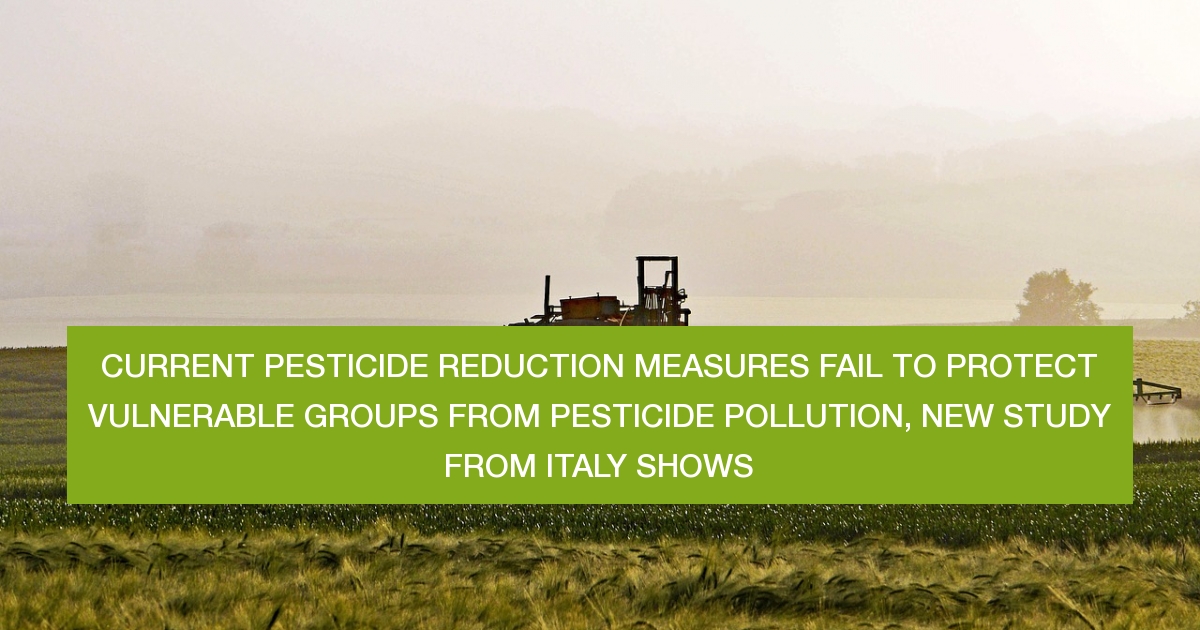 Pesticides are detected in playgrounds and schoolyards, despite measures taken by local authorities in the Italian province of Bolzano-South Tyrol. A new study reveals that the pesticide reduction measures proposed by the EU Commission are too weak.  The results show that it is important to impose more stringent buffer zones.

The study, a collaboration between experts from the Health and Environment Alliance (HEAL), Pesticide Action Network (PAN) Europe,PAN Germany and the University of Natural Resources and Life Sciences in Vienna (BOKU), was carried out in one of the main agricultural regions for apples and wine production in Europe.

The conclusions show that existing local measures to reduce pesticide drift in the region are not effective enough to prevent pesticide exposure in public spaces. They also indicate that the EU-wide measures proposed under the sustainable use of pesticides regulation (SUR), which are less strict than those taken in the area of the study, are bound to fail to protect the local communities from exposure to health-harming pesticides [1, 2, 3].

Despite a slight reduction in pesticide residues during the study period, residues of at least one pesticide could still be detected in 73% of the sampled sites and multiple residues could be found in 27% of the sites in 2020.
Fluazinam, a fungicide which is suspected to cause damage to the unborn child and which has been linked to cancer in animal studies, was detected in 74% of the contaminated sites. Other harmful pesticides like the fungicide captan (60%) and the insecticide phosmet (49%) were also frequently detected.
The percentage of residues with potential to cause harm to human reproduction increased significantly, from 21% in 2014 to 88% in 2020. The percentage of residues with potential to cause harm to certain organs also increased from 0% in 2014 to 21% in 2020 [4].
The percentage of substances with the potential to affect the endocrine system (89%) or cause cancer (45%) in humans remained constant over the study period.
If these concentrations of pesticide residues were found in locally grown food, they would be several magnitudes above those that are considered safe for consumption in the EU.
The percentage of pesticide residues detected with acute toxicity to honeybees remained high throughout the study period.
These findings build on a previous study showing pesticides residues were detected at distances ranging from five to 600 meters from the agricultural sites where they were originally used [2].

“With the available data we were not able to show that mitigation measures applied by the local authorities efficiently reduce pesticide contamination of non-target areas. A consistent monitoring is essential to ensure the efficiency of mitigation measures and the reduction of potential risks to humans and the environment by hazardous pesticides,” highlights Dr. Caroline Linhart, ecologist and environmental epidemiologist research consultant and lead author of the study.

In the European Union, the risk assessment of pesticides uses prediction models to estimate their distribution in the environment. However, these models do not take real-life data into consideration.

“Our data shows that official risk assessments appear to underestimate the real exposure to pesticides of non-target organisms, including humans. It is important to point out that what we have shown in this study most likely mirrors the situation in other regions with intensive apple and wine production in Europe and worldwide,” explains Professor Johann Zaller, co-author from the University of Natural Resources and Life Sciences in Vienna (BOKU).

The results come just after the European Commission published a proposal for a new regulation on the sustainable use of pesticides (SUR), setting legally binding reduction targets to halve pesticide use across all EU member states by 2030 and particularly those known to cause health hazards [5]. The proposal also aims to prohibit the use of pesticides in all ‘sensitive’ areas used by the general public or of ecological importance within three metres.

Interestingly, several of these proposed EU-wide measures are less stringent than those put in place by the regional government of Bolzano-South Tyrol, where pesticides with hazardous properties cannot be used in areas used by the general public and children, nor within a 30-metre distance from them.

“Our study shows that regional measures to reduce pesticide exposure, which are stricter than those proposed by the EU Commission, are simply not enough to prevent exposure of children and the general public to substances that have the potential to cause cancer or harm reproduction. A more drastic reduction of all pesticides and a significant expansion of the suggested buffer zones to at least 50 metres are urgently needed to protect health,” explains Dr. Angeliki Lyssimachou, Senior Science Policy Officer at HEAL and co-author of the study.

“Even though the regional government in South-Tyrol during the last few years implemented certain mitigation measures in order to limit drift, we still see that playgrounds are contaminated with pesticides that have the potential to cause harm, posing a risk to residents and vulnerable groups”, concludes Koen Hertoge, President of PAN Europe, initiator and co-author of the study.