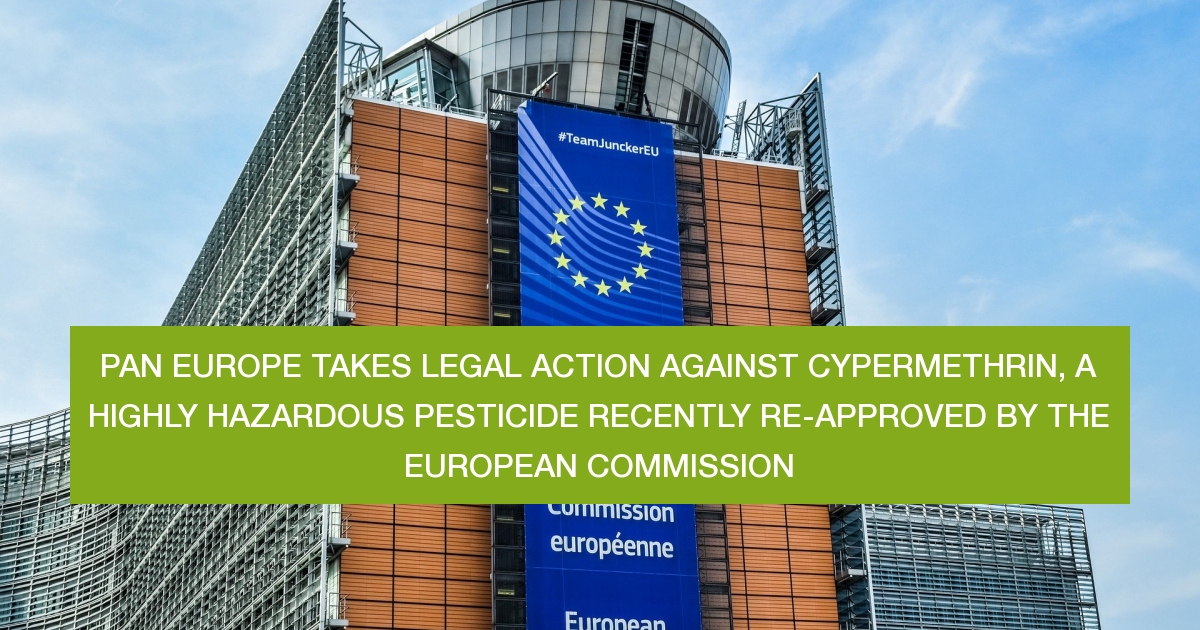 PAN Europe has submitted a formal complaint to the Court of Justice of the EU. With the support of the NGO Sum Of Us, PAN Europe challenges the fact that the European Commission did not follow the conclusions of its scientific agency (EFSA) to ban this insecticide. Endocrine disruption, genotoxicity and extreme toxicity to aquatic life and bees were among the numerous issues highlighted by the EFSA. A considerable amount of data gaps prevented the agency from finalizing the risk assessment of the substance.

Salomé Roynel, a policy officer at PAN Europe says: "PAN Europe considers that this re-approval does not respect the EU legislation, in terms of human and environmental protection. The discussions around the reapproval of this toxic substance should have taken place in 2016. In November 2021, after years of discussions between the European Commission, Member States and the EFSA, cypermethrin was re-approved for 7 years in the EU."

The European Food Safety Authority (EFSA) has identified 4 so-called “Critical Areas of Concerns”(1). They represent major issues that do not allow the EFSA to consider the substance safe. So it does not fulfil the legal requirements to be approved in the EU.

Martin Dermine, coordinator at PAN Europe adds: "The EFSA identified issues with the endocrine disrupting and the genotoxic properties of the substance. The Authority also concluded that cypermethrin presents excessive toxicity to the aquatic environment and for bees to be used, even at very low concentrations."

Salomé Roynel adds: "This is clearly a political decision. From the summaries of the meetings with the Member States, it appears that the European Commission has been proposing either a ban on the substance or a re-approval with only minor restrictions. These are  opposite decision proposals, based on the same EFSA conclusions. This is one more example that the approach taken by DG Sante is to find a political consensus with Member States rather than to follow science and respect the law."

Martin Dermine concludes: "It is a regular practice that the European Commission does not follow the rules. We have complained many times but nothing has changed in practice. The recent revision of the Aarhus regulation allows us to challenge this maladministration. We hope the Court of Justice of the EU will fix this and force the European Commission to base its decisions on science rather than on agribusiness and political interests.

Cypermethrin is a pyrethroid insecticide broadly used in the EU. It was approved from 2005 until 2016 (dir. 2005/53/EC). As for the majority of pyrethroids, they present high toxicity to insects, including bees and aquatic life, as well as endocrine-disrupting properties to humans. It is listed as a Highly Hazardous Pesticide on the PAN International list(2). It is authorised in all EU countries but Italy.