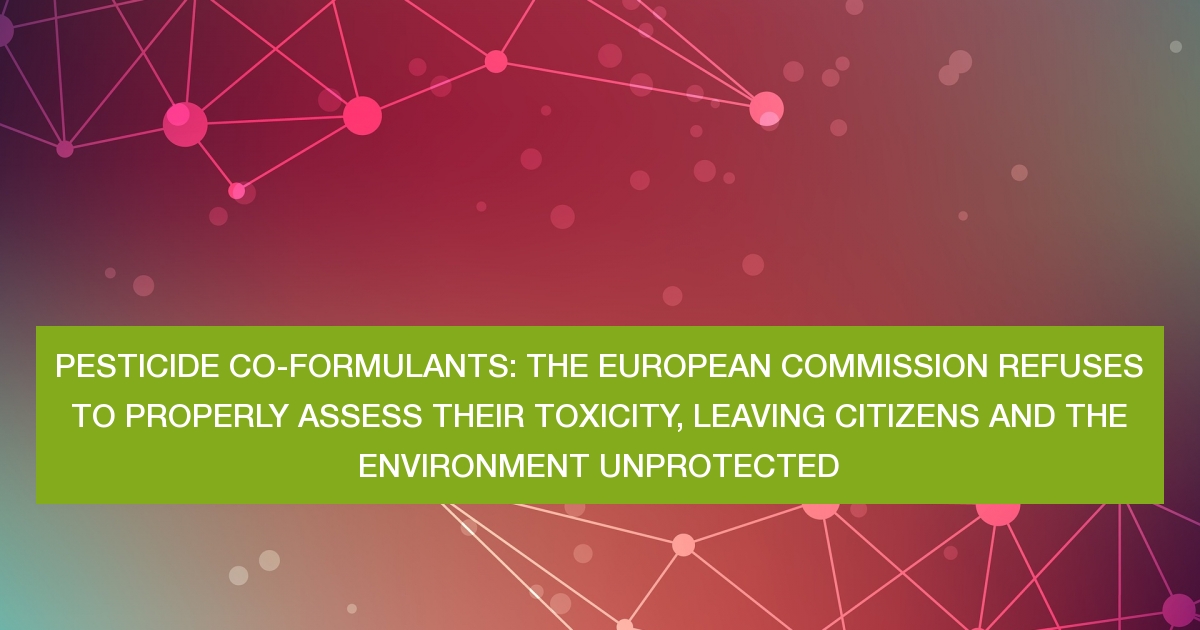 A new proposal by the European Commission will not solve the problems with pesticide co-formulants. Co-formulants are substances that make pesticide active ingredients efficient. Many studies show that these substances are toxic. The Commission proposal does not ensure compliance with the EU pesticide regulation (EU) 1107/2009. It fails to impose the toxicity criteria demanded by the law. With the Commission's proposal, citizens' health and the environment will remain unprotected against these "unknown" chemicals.

Tomorrow, the Standing Committee on Phytopharmaceuticals[1] will discuss a draft implementing regulation concerning the “identification of unacceptable co-formulants” in pesticides. With this proposal, the Commission fails to properly fill a regulatory gap and fully implement the pesticide regulation[2].

Martin Dermine, Environment and Health Policy Officer at PAN Europe said: “Co-formulants are chemicals, such as petrol derivatives or powerful detergents, that increase the toxicity of pesticide products, but are not the declared pesticide “active ingredient”. These substances are dangerously overlooked and are currently not really regulated. Researchers repeatedly find that they can have grave effects for human health and the environment. For example, some of them are potential carcinogens, others kill bees. With its proposal, DG Sante goes against the law and proposes a low-level risk assessment that would not properly assess the toxicity of co-formulants on people's health, while not assessing at all their toxicity on bees, and biodiversity in general.”

The current regulatory set-up neglects pesticide co-formulants: there is no standardised approach across Member States. According to information PAN Europe received, there are very large differences in how thoroughly Member State authorities look into the risks associated with co-formulants or even collect such information. The proposed regulation could close this regulatory gap, proposing harmonised criteria and procedures applicable to co-formulants. PAN Europe considers that the proposal falls far short of delivering: it lists a few harmonised cut-off criteria, but totally fails to address the fact that there are no harmonised data requirements[3] or risk assessment procedures to check whether the substances fulfill these criteria.

Angela Rupp, a campaigner at PAN Europe added: “EU law is clear: co-formulants need to comply with the same approval criteria as pesticide active ingredients: no harmful effects on human health and no unacceptable effects on the environment[4]. This proposal goes against this principle”.

Angela Rupp continues: “It is completely absurd that the proposal is limited to fixing criteria for a basic level of protection, but it completely fails to impose data requirements that need to be submitted by the industry and checked by the Member States. Despite our explicit request to DG SANTE to adopt data requirements, they have refused to do so - leaving Member States in the dark. This gives the impression the Commission tries to delay the phasing out of toxic co-formulants, hence delaying any improvement in the protection of citizens and the environment. How could a Member State ban a co-formulant if it does not receive the needed data to assess it?”

The current draft refers the control of co-formulants to a number of other EU regulations[5] concerning non-pesticide chemicals. These are not as strictly regulated as pesticides.

Angela Rupp concluded: “The legislator purposefully set out a more stringent framework for components of pesticide products as they are intentionally spread on our food and poured into the environment. Co-formulants used in pesticides must thus be risk assessed accordingly!”

Information on pesticide co-formulants is largely non-public information, considered industry secrets. Scientists have criticised this lack of transparency, pointing to the substantial dangers that these substances pose[6]. The regulatory framework considers co-formulants as “biologically inactive” components of pesticide products, in contrast to the declared “active ingredients” i.e., the component that is declared by the industry as acting against the targeted 'harmful' organism. However, it is up to the pesticide producers to disclose if a component of a pesticide is an active substance or a co-formulant.

Various independent research found that co-formulants, in fact, can also have herbicidal and insecticidal activity. The surfactant POE-tallowamine, for example, was banned as a co-formulant in 2021. It was confirmed as highly toxic and having powerful herbicidal effects. Another surfactant, Tween 20, proved highly toxic to insects. Studies indicate that this substance is so toxic to insects, that it could be used as an insecticide[7]. Pesticidal properties are not tested for co-formulants. These examples provide all the more reason that co-formulants should be assessed in the same way as active ingredients.

A large number of co-formulants used in pesticide products were confirmed as being highly toxic. In 2021, a first ad-hoc list of “unacceptable co-formulants” was adopted by the EU Commission, containing 144 substances to be banned due to their inherent hazardous properties[8]. The procedure for this list was highly intransparent, based on various Member States proposing co-formulants to be banned, without any clear criteria, data requirements or procedures.

[3] A data requirement is an information the pesticide industry needs to provide to the Member States where it applies to obtain the authorisation to sell a pesticide.

[7] Pehlevan, B., & Kovanci, O. (2016). Laboratory Evaluation of Tween 20 for Potential Use in Control of Cacopsylla pyri L. Eggs and Nymphs (Homoptera: Psyllidae). Journal of Environmental and Biological Sciences, 10, 39–43.