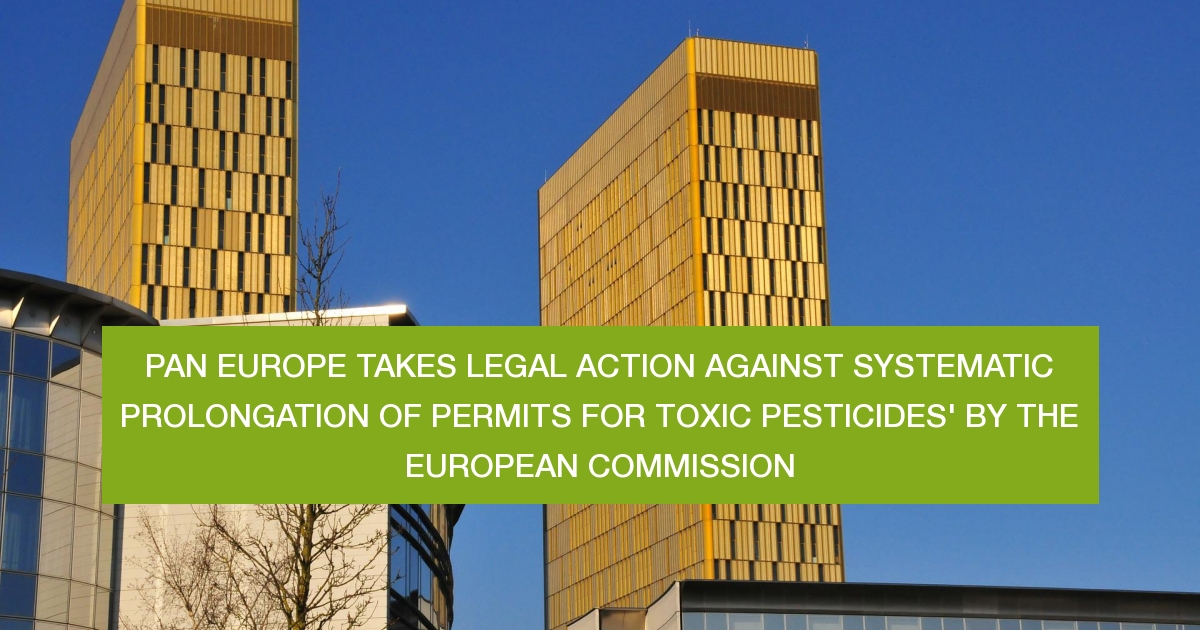 PAN Europe has submitted a formal complaint to the Court of Justice of the EU. We dispute the 6th extension of approval granted to the pesticide ‘Dimoxystrobin’. This chemical is on the list of the most toxic pesticides that should have been banned years ago. With this case, PAN Europe sets out to challenge the Commission's systematic practice of granting consecutive years-long prolongations to dangerous pesticides, without any proper re-evaluation.

Hans Muilerman, chemical officer at PAN Europe said: “The EU law is clear: a decision on the re-approval of dimoxystrobin should have been taken by 2016. It is one of the most hazardous pesticides in the EU: classified as likely carcinogenic and toxic to reproduction, as well as persistent in the environment. DG Sante keeps prolonging it, for 6 years now, against the rules, and despite conclusions published in 2017 by the 'Rapporteur Member State' that this substance should not be re-approved".

Delayed re-assessments and approval prolongations for pesticides at the EU level are a standard pattern. To illustrate this, 136 pesticides have been prolonged under article 17 in 2021 (accounting for almost 30% of all currently EU-approved pesticides), while only 10 decisions regarding the (non-)renewal of active substances were adopted in that same year. Even for the most hazardous classified substances, so-called 'Candidates for Substitution', approval extensions are also the norm: extensions are granted for up to 9 years. Already 108 extensions - solely due to delayed assessments - were granted since 2011 to 39 out of the 54 pesticides from the approved Candidates for Substitution list.

Angela Rupp, a campaigner at PAN Europe said “At the core of PAN Europe’s legal action, we question the unlimited use of Article 17 of pesticide regulation 1107/2009/EC. Instead of meeting the 3-year deadline to re-assess and decide on the re-approval or not of a pesticide, the European Commission and Member States keep dragging their feet. Toxic pesticides that should have been re-evaluated nearly 10 years ago are still on the market without any re-assessment of their toxicity".

Angela Rupp added: "This practice flies in the face of the stated goal and purpose of the EU pesticide regulation. After all, the legislators have set up strict deadlines to regularly review the toxicity of pesticides to protect people's health and the environment. Article 17 cannot be considered as an excuse to completely disregard them.”

The next example of misuse of this article stands on the Standing Committee on pesticide's agenda for 14-15 July, where the European Commission proposes to prolong a series of highly toxic substances such as dicamba, deltamethrin or chlorotoluron. In addition, the fungicide 8-hydroxyquinoline was classified as toxic to reproduction 1B since 2016, which means it should be banned. But the European Commission proposes to keep prolonging it, for the 6th year, exposing pregnant women to a reprotoxic pesticide.

Hans Muilerman concludes: “What should be the exception has become a systematic standard practice. Not respecting the deadlines for re-evaluation, both at Member States and Commission-level, looks like a strategy to maintain on the market toxic substances, to the benefit of agribusiness. The pesticide regulation is clear: priority must be given to protecting people's health and the environment. We hope the judges will correct this maladministration."

In October 2021, the Aarhus regulation was amended (regulation 2021/1767/EC), giving the possibility to civil society to challenge pesticide approvals at EU-level. Until then, the way the EU had transcribed the Aarhus convention into EU legislation (regulation 1367/2006/EC) did not allow for such actions. Following complaints by  civil society before the Aarhus Committee Compliance Committee, the EU Commission was obliged to revise its legislation in order to grant broader access to justice to citizens.

The EU has listed highly toxic pesticides as ‘Candidate for Substitution’. In 2009 it was agreed that this category of chemicals should be substituted with safer alternatives. However, their use is extended year after year and recently PAN Europe exposed in the report ‘Forbidden Fruit’ that the level of residues of this category has risen in fruit and vegetables. PAN Europe is campaigning to ban the most toxic 12 immediately and all others by 2030 at the latest.

Q&A's on our legal action

FACTSHEET on Pesticide approval prolongations by the EU