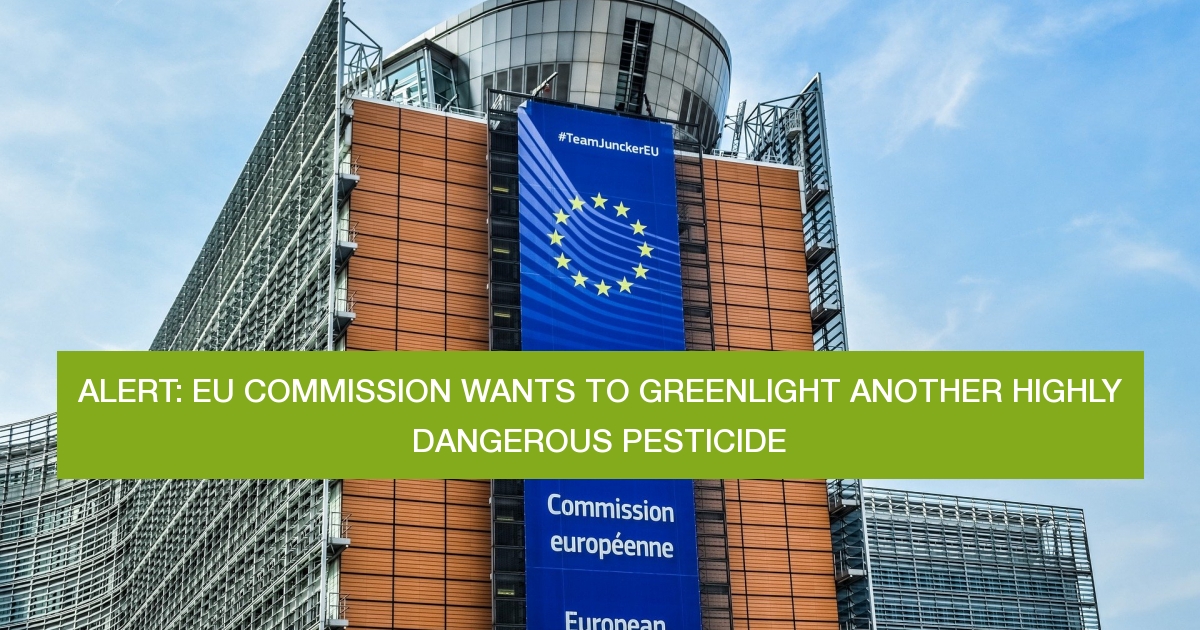 Next Thursday the European Commission will propose to EU Member States to maintain the notoriously toxic pesticide Propyzamide on the EU market. This EU proposal goes against the European Food Safety Agency (EFSA)’s opinion and against the law. The substance poses high risks to consumers. It is one of the most frequently found toxic pesticides in European-grown fruits and vegetables[1] and is on the list of the Toxic 12 pesticides that should be banned immediately according to PAN Europe. Générations Futures and PAN Europe are calling upon Member States to reject this proposal, to protect EU citizens’ health and comply with the EU law.

Under the EU Pesticide regulation, a pesticide's substance can only be approved when it is demonstrated that there are no harmful effects on human health or unacceptable effects on the environment. For that purpose, all information on the toxicity of substances and their related metabolites must be submitted by the producing industry actor prior to their approval/renewal.

Accordingly, Propyzamide should have been banned six years ago[2]. Instead, the substance was re-approved providing that “confirmatory information” on the toxicity of its metabolites and risk for consumers would be submitted later.

Salomé Roynel, Policy Officer at PAN Europe comments: “This practice to ask for confirmatory information is a standard procedure for re-approving toxic substances. It is not in line with the Pesticides regulation, which limits it to specific and exceptional conditions[3]. Propyzamide did not meet any of these conditions”.

When the confirmatory information was submitted to EFSA in 2018 and 2019, it, in fact, further supported the risks to consumers and these data were considered by EFSA experts as “inconclusive[4]”.

Pauline Cervan, Toxicologist at Générations Futures explains: “The submitted confirmatory information is not sufficient to address the data gap raised by EFSA regarding the genotoxicity potential of some metabolites and the risk for consumers. Worse, the information submitted confirmed the risk of leaching of some metabolites in groundwater at concentration levels above the drinking water limits, which is a reason sufficient to the withdrawal of Propyzamide.”

The Pesticide Regulation provides that when the confirmatory information has not addressed the concerns and/or shows that the substance does not meet the approval criteria, the European Commission must propose to restrict or withdraw the conditions of approval of the substance.

Pauline Cervan adds: “The European Commission is legally required, on the basis of this confirmatory information, to concede that Propyzamide does not meet the approval criteria and to propose its withdrawal. But it proposes the opposite ”

In an open letter, Générations Futures and PAN Europe jointly ask the Member States to oppose the European Commission's proposal to maintain Propyzamide on the EU market. We demand its withdrawal in accordance with the Pesticide Regulation. A letter was also sent to the European Commission asking it to review its current proposal.

Salomé Roynel concludes: “Propyzamide is only the tip of the iceberg: The Commission and Member States are repeatedly abusing this backdoor to keep very toxic substances on the market at the expense of consumers’ safety.”

Propyzamide is an herbicide approved as a candidate for substitution from May 2018 to June 2025 in the context of Commission Implementing Regulation (EC) 2018/755. The classification as candidate for substitution is due to its persistent (P) and toxic (T) properties of propyzamide. Additionally, the active substance is classified as suspected carcinogen (Cat.2, H351), acute toxic for aquatic organisms (H400) and toxic for aquatic organisms with long term effects (H410).

[1]PAn Europe, Forbidden Fruit: The dramatic rise in dangerous pesticides found on fruits and vegetables sold in Europe and evidence that governments are failing their legal obligations.

[2]EFSA conclusion of 2016 highlighted outstanding data gaps and related critical areas of concern, which should have led to the withdrawal of Propyzamide six years ago. Data gaps on the mammalian toxicity, on residues in food, on the fate of the substance in the environment (degradation into metabolites) and on risks for non-target organisms (incl. aquatic species, bees, plants).

[4]EFSA (European Food Safety Authority), 2020. Technical report on the outcome of the consultation with Member States, the applicant and EFSA on the pesticide risk assessment for propyzamide in light of confirmatory data. EFSA supporting publication 2020:EN-1935. 87 pp.doi:10.2903/sp.efsa.2020.EN-1935.