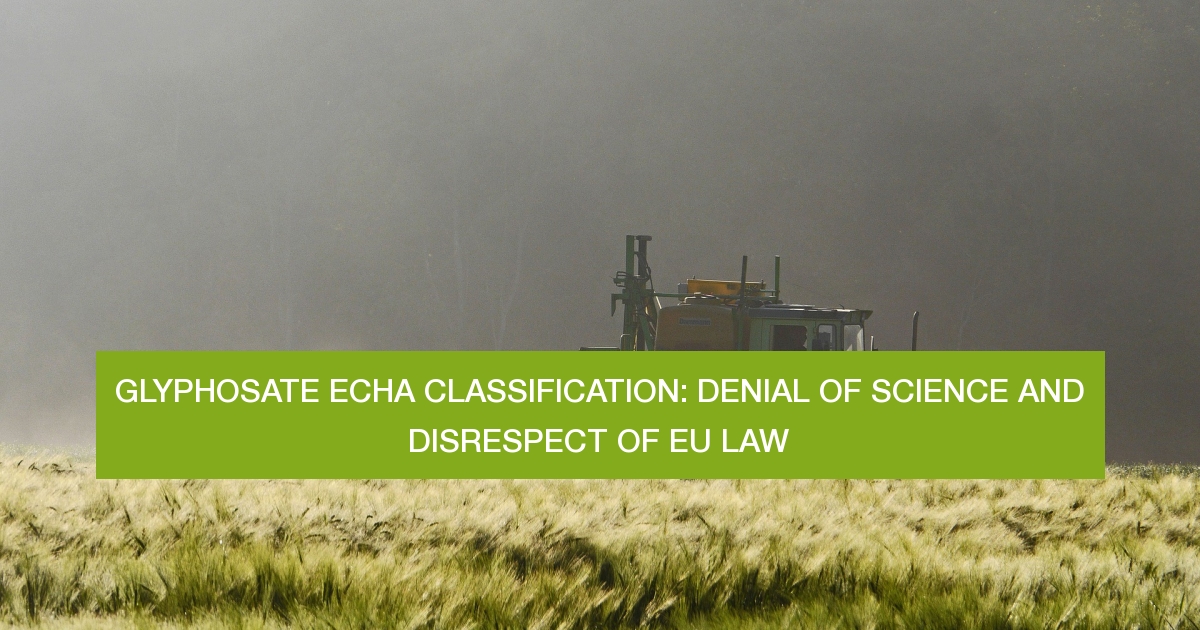 The European Chemicals Agency (ECHA) decided to maintain the existing classification of glyphosate: toxic to aquatic life but still no classification as a carcinogen, despite of even stronger scientific evidence than in 2015 when WHO’s International Agency for Research on Cancer (IARC) classified glyphosate as "probably carcinogenic to humans". The "Ban Glyphosate" civil society coalition strongly rejects ECHA’s conclusion that “available scientific evidence did not meet the criteria to classify glyphosate for specific target organ toxicity, or as a carcinogenic, mutagenic or reprotoxic substance”.

ECHA’s Committee for Risk Assessment (RAC) once more classified glyphosate as a substance causing serious eye damage (Eye Damage 1) and being toxic to aquatic life with long-lasting effects (Aquatic Chronic 2). However, ECHA once again dismissed the existing strong evidence for classifying glyphosate as a presumed human carcinogen (Category 1B according to EU’s CLP regulation). While IARC, in 2015, had classified the herbicide as “probably carcinogenic to humans” (equivalent to EU’s “presumed human carcinogen”) ECHA did not even consider it a Category 2 classification (“suspected human carcinogen”)

Peter Clausing, Toxicologist and member of the “Ban Glyphosate” civil society coalition says: “It is sad to see that ECHA has obviously repeated its scientific misconduct from 2017. In order to reach its conclusion, ECHA had to dismiss the tumour findings seen in five mouse and seven rat carcinogenicity studies. In doing so, ECHA not only violated good scientific practice but also its own guidelines and even European regulations, as demonstrated in several peer-reviewed articles. (1)”

Moreover, in order to reach its conclusion, ECHA had to dismiss (or ignore) a large body of supporting evidence from a variety of new and already existing peer-reviewed publications. This includes, in particular, laboratory studies describing the carcinogenic mechanism of glyphosate, as well as epidemiological studies reporting an increased risk of DNA damage and cancer in people exposed to glyphosate.

Once again ECHA relied unilaterally on the studies and arguments of the industry. This is despite the fact that a recent review of industry studies on the DNA-damaging effects of glyphosate by scientists at the Vienna Cancer Research Institute came to the conclusion that only two of 35 reviewed industry studies can be considered "reliable", 15 others only as "partly reliable" and 18 of these studies had to be classified as “not reliable”, due to substantial deviations from applicable test guidelines.

Critical reflections on ECHA's conclusion will also come from three scientists on the sidelines of a European Parliament Online event which will start today at 16h. These scientists are none other than the former director of the IARC Monographs Programme, Kurt Straif, the former director of the US National Toxicology Programm and advisor to IARC's glyphosate working group, Christopher J. Portier, and the Viennese specialist in genetic toxicology and cancer research, Siegfried Knasmüller (2).

Now the ball is in EFSA's court. Only a few days ago, EFSA has announced that it is unable to meet the timetable for the glyphosate assessment and would need an extra year to assess the breadth of comments and studies submitted in the course of the public consultation, until July 2023 (3). The "Ban glyphosate" coalition appeals to EFSA to use its “extra year” to carry out a thorough evaluation of all relevant studies according to good scientific practice and in line with the applicable guidelines.

For the webinar ‘After the EP-PEST Committee: The issues around glyphosate remain unresolved’ register here.

(2) The Health and Environment Alliance (HEAL), the European Environmental Bureau (EEB) and ClientEarth invited these experts to present their findings to the RAC, see here.

(3) EFSA’s approach is opposed to the one from ECHA, which did not decide to take additional time to analyse the new scientific evidence and the numerous comments they received during the public consultation. EFSA has now to assess the multitude of studies that report harmful effects of glyphosate on the environment, such as damage to bees, other insects, amphibians, as well as soil life and fertility.