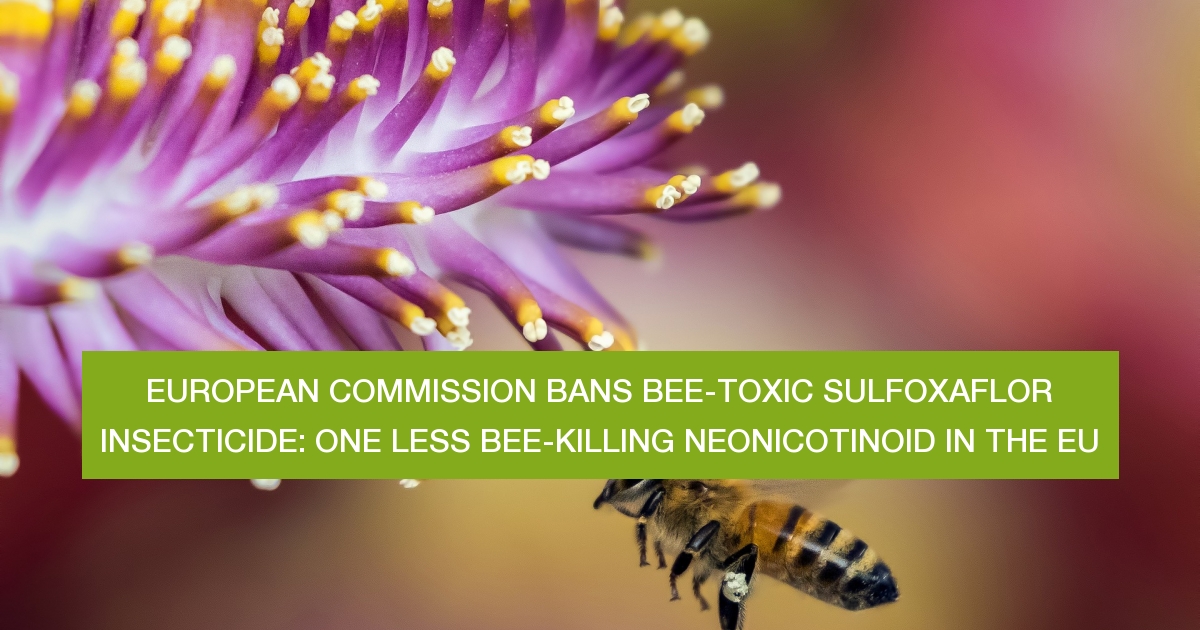 The European Commission confirmed today that Sulfoxaflor insecticide will soon be banned in the EU. Only 7 years after its first approval, this neonicotinoid-like substance will be off the market due to concerns about its toxicity to bees.

Sulfoxaflor was first approved in the EU in 2015, as an insecticide, with similar properties as other already banned neonicotinoid insecticides. It is the first time a pesticide is banned only 7 years after its initial approval in the EU, for environmental reasons.

Martin Dermine added: “PAN Europe has been advocating against its initial approval: back in 2015, it was crystal clear that this substance posed an enormous risk to EU pollinators! The European Commission should have applied the precautionary principle and not approve it! Banning this substance after 7 years nevertheless gives a strong signal to the pesticide industry: stop applying to sell bee-toxic pesticides in the EU! We nevertheless regret that the use of this chemical is maintained for greenhouses as those are not, contrary to what the European Commission pretends, closed systems”.

When banning a pesticide for environmental reasons, the European Commission always restricts them to greenhouse use as, in theory, no leaks can take place. Evidence nevertheless shows it is not at all the case.

Martin Dermine concluded: “We now ask the European Commission to treat other bee-toxic pesticides, such as flupyradifurone or cypermethrin, in the same way. The road is long still to claim that EU pesticides are safe for our environment!”.

Sulfoxaflor was first approved in 2015. Its producer, Dow Agrosciences (now called “Corteva”) claimed it was not a neonicotinoid, as they purposely invented a new category for this substance (the sulfoximines), to avoid the brand “neonic”, with the negative image it has on bees. Due to the lack of data on its toxicity to bees, Dow Agrosciences was reques²ted to send to the European Commission “confirmatory information”. In 2019, the information was considered insufficient to ensure bees’ safety by the European Food Safety Authority. After several years of analysis and discussion between the European Commission, the EFSA and Member States, the European Commission finally proposed to Member States to restrict the use of this substance to permanent greenhouses in Fall 2021. No qualified majority was obtained in a vote organized in the Standing Committee on Phytopharmaceuticals end of 2021. The European Commission then brought the topic to the “Appeal Committee” where a second vote took place on 31 March. As, again, no qualified majority in favour or against the proposal from the Commission was reached, the European Commission is now entitled to move forward with banning this insecticide.