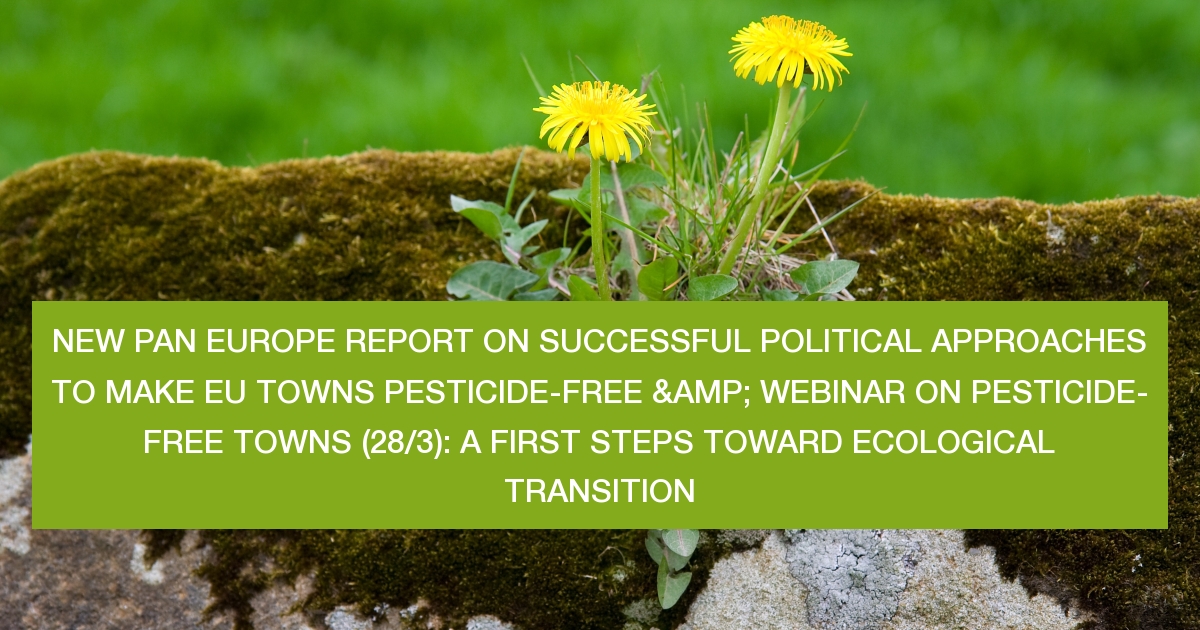 Celebrating the Pesticide Action Week, PAN Europe publishes today a new report “Pesticide Free Towns: A Diversity of European Approaches”, which explores successful efforts undertaken by several EU countries to phase-out pesticides in public areas. On 28 March, PAN Europe organises a webinar on “Pesticide-Free Towns: First Steps Toward Ecological Transition”. Banning pesticides from public areas is an easily implementable measure to reduce harm to people’s health and the environment. Experience from across the EU shows that a successful transition towards pesticide-free towns needs effective regulation, the sharing of best practices as well as a deep involvement of citizens.

Today, more and more towns decided to end the use of pesticides for town maintenance, or even entirely banning pesticide use on their territory. These pesticide bans often cover playgrounds, parks, amenity areas, school or hospital vicinities, and other public (green) spaces. According to Henriette Christensen, Senior Policy Adviser at PAN Europe: “Eliminating pesticides from these areas significantly reduces health risks, especially for the most vulnerable groups, such as children, pregnant women, or the elderly. Additionally, allowing wild herbs to grow and flourish in urban areas contributes to bolstering biodiversity and brings us all one step closer to living in harmony with nature”.

PAN Europe’s new report “Pesticide Free Towns: A Diversity of European Approaches” explores various approaches taken by 8 European Member States to reduce or ban pesticide use in "sensitive” public areas and towns at large. The report underscores that phasing out pesticides in these areas is a matter of political will and that pesticide-free town maintenance is already successfully implemented by thousands of municipalities across the EU. The report highlights the important role of pioneering towns that push not only for alternative maintenance methods, but also develop the tools to include citizens in the process of transitioning towards allowing nature back into our towns. Some of these experiences will be shared today, at PAN Europe's Webinar “Pesticide-Free Towns: First Steps Toward Ecological Transition”.

Henriette Christensen, Senior Policy Adviser at PAN Europe adds: “The fact that some Member States already successfully implemented a full pesticide ban in public areas, shows that an EU-wide effective regulation is feasible and should be implemented as soon as possible. Sharing best practices, communication strategies and involving citizens in this process are crucial stepping stones to speed up the process. Moreover, a new regulatory framework should ensure that municipalities are granted the competencies to protect their citizens' health and legally restrict pesticide use on their territories. Thanks to many pioneer cities and towns, we already have non-chemical alternatives to pesticides and communication tools available to free our towns from pesticides across Europe”.

We cordially invite you to join today’s webinar, co-hosted by MEP Eleonora Evi (Greens/EFA), at 15h30 CET. The registration link to the webinar can be found here.