EU Biodiversity Strategy at risk! DG Sante and EFSA confirmed before the European Parliament their will to favour pesticides over wild bees’ protection! 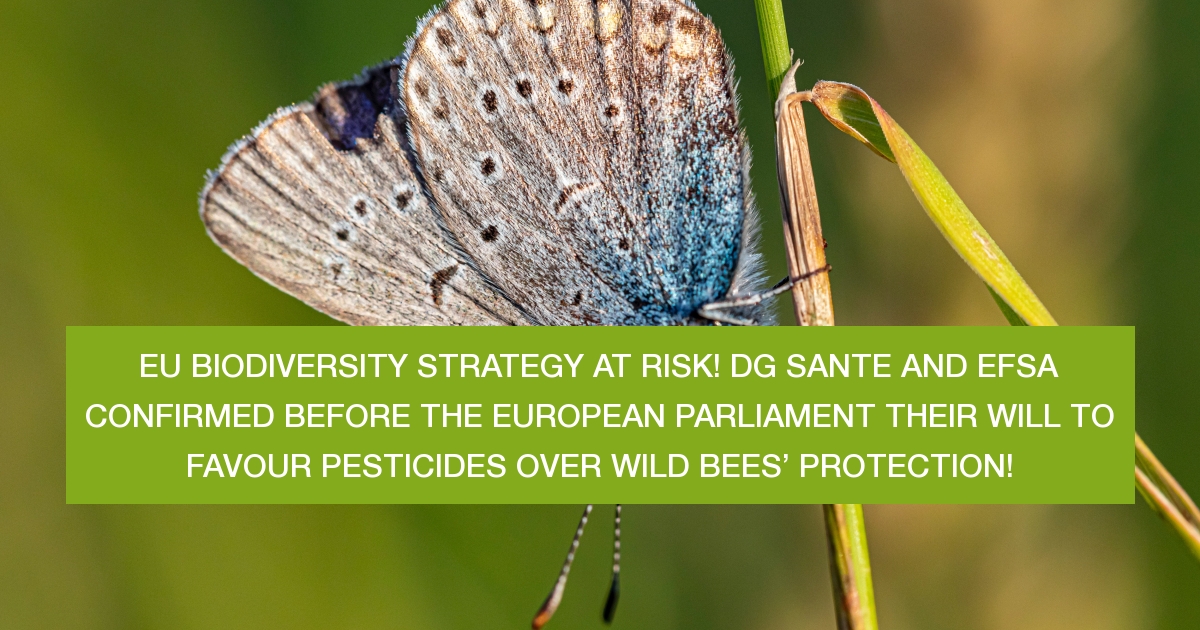 Martin Dermine, Health and Environment Policy Officer said: “It recently appeared that the pesticide industry is spraying bee-toxic pesticides on control fields, which are supposed to be pesticide-free in order to compare with the impact of treatments on the treated fields. This was questioned by MEPs but no scientific or legal answer was provided, both, by the Commission and EFSA. Their approach is totally unscientific and wild bees remain unprotected”.

Indeed, while the European Commission representative justified the use of pesticides on control fields by the fact that too much burden should not be put on the shoulders of the industry, the representative of EFSA claimed that control fields need to be comparable to conventional agroecosystems[2].

As scientific evidence shows that bumblebees can be more susceptible to pesticides than honeybees, MEPs also questioned the proposal from EFSA to allow for a 10% reduction in colony size for bumblebees, equal to what was decided for honey bees in 2021.

Martin Dermine added: “Monitoring programmes show that many wild bee species are in decline in Europe. EFSA and the Commission were asked to justify their approach in terms of its consequence on the recovery of biodiversity, which is a key objective of the EU Green Deal. The answers provided were dramatically empty: they have no idea and try to get rid of this file as soon as possible, at the expense of wild bee populations”.

Hans Muilerman, Chemical Officer at PAN Europe emphasized: “Both EFSA and the Commission tried to hide behind the lack of data or models to justify their unscientific work. They are fooling MEPs: how can uncertainties and data gaps lead to a proposal for high damage on wild bee populations? They simply try to give a scientific dressing to an approach that is 100% political. What they do goes against EU law[3]!”.

Martin Dermine conclude: “The representative of the Commission stated that health and the environment have precedence over private interests, but their approach is clearly in favour of the agroindustry: they propose 10% damage on wild bees for one pesticide exposure while they know that bees are exposed to cocktails of pesticides all year round. DG Sante and EFSA are bending before agribusiness and burying the biodiversity recovery objectives of the Commission’s Biodiversity Strategy”.

For more information, read PAN Europe’s Position Paper on the development of a risk assessment of pesticides on bumblebees and solitary bees.

[2] In ‘conventional agroecosystems’, bees are exposed to cocktails of pesticides all year round. While the EFSA assesses pesticides one by one, the cocktail effect as well as the long term exposure are not taken into account in the EFSA proposal.

[3] EU law (regulation 1107/2009/EC) states that a high level of protection of the environment against pesticides must be ensured. Furthermore, the implementation of the precautionary principle must be applied. In this case, both the European Commission and EFSA acknowledge important data gaps and uncertainties and propose a high level of damage to wild bees by pesticides.

20220304 EU Biodiversity Strategy at risk ! DG Sante and EFSA confirmed before the European Parliament their will to favour pesticides over protection of wild bees.pdf
Our campaigns