The toxic alliance between the FAO and CropLife International 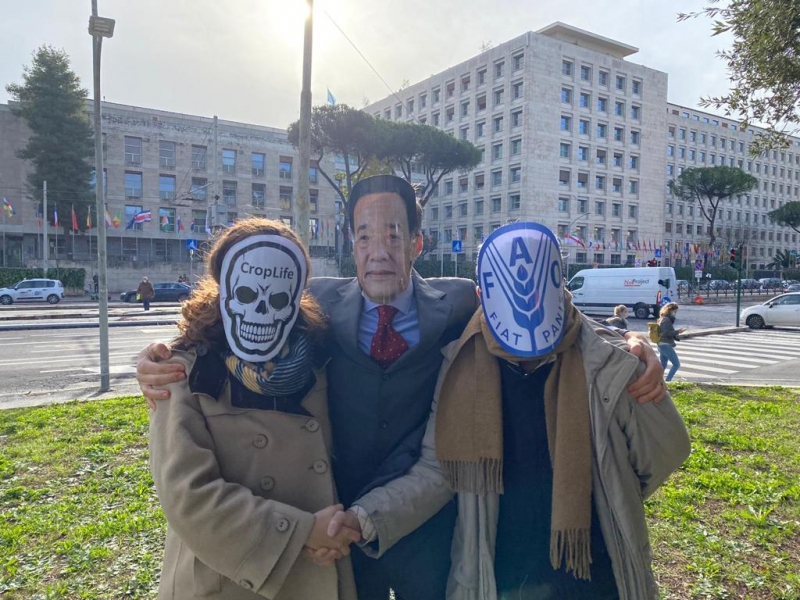 Why did PAN Europe ask the EU to suspend payments to the World Food Organisation FAO? And why is the FAO so closely connected to Croplife International, the lobby organisation of the pesticide industry? An update.

On October 2nd, 2020, the Food and Agriculture Organisation of the United Nations (FAO) and CropLife International, the umbrella organisation of the global pesticide industry, signed a letter of intent, officialising their collaboration. While the private sector has been working with FAO for years, this official collaboration with the pesticide lobby CropLife directly threatens FAO’s work on supporting farmers in the transition towards agroecology, while reducing the harms of synthetic pesticides worldwide.

The cooperation between a public organisation and a trade association representing the interests of corporations that massively produce pesticides is criticised by many. In December 2021 some 187.000 protest signatures from all over the world were handed over to the FAO in Rome.

Later, representatives from PAN, FIAN, IITC, and IPEN met with FAO Deputy Director General Beth Bechdol and her colleagues in the Project Support, Partnerships, and Plant Protection divisions on July 25, 2022. This long-awaited meeting was held more than a year and a half after the 11 civil society and Indigenous Peoples organisations made a formal request to discuss these concerns with the Director-General.

In this dialogue, FAO Deputy Director-General Bechdol minimised the impact of the Letter of intent and stressed that only one joint public activity has taken place (a webinar). She also said that there have been no financial contributions to FAO from CropLife since 2011 (where CropLife international donated 3 million USD to FAO).

While FAO’s intent to improve transparency on their relationship with CropLife Int is welcome, even if extremely slow, a relationship with the largest pesticide lobby group (BASF, Bayer Crop Science, Corteva Agriscience, FMC, and Syngenta), is absolutely unacceptable. It is even more alarming when such a relationship has been, at several occurrences, mentioned to be more of a “partnership” that involves monthly meetings “to talk about key issues” and an established work plan. From the start, CropLife should not have been granted a privileged entrance to the FAO, just as the tobacco industry should not have a direct entrance to the World Health Organisation, and the fossil fuel industry should have no direct influence on the Intergovernmental Panel on Climate Change.

The meeting with Deputy-Director Bechdol clarified that the Letter of Intent was reviewed by a partnerships committee under a “due process” and not by FAO’s due diligence process called FRAME.

All these elements lean towards the same conclusion: a liaison with the biggest players in the pesticide industry – an industry that is responsible for 385 million pesticide poisonings per year and unprecedented levels of pollution and biodiversity loss – should not come into place and therefore shall be ended as soon as possible.

The role of the European Union and its Member States

The FAO’s overall programme of work is funded by assessed and voluntary contributions. Member countries’ assessed contributions comprise the regular budget, set at the biennial FAO Conference. For instance, for the 2020-21 biennium, FAO mobilised USD 2.7 billion in voluntary contributions from resource partners in support of FAO’s Programme of Work. For the same biennium, the European Union and several European member states were categorised as Top resource partners by FAO’s Council. Indeed:

Correlatively, from diverse sources of information, it is possible to establish that other EU Member States have greatly contributed to the FAO budget through voluntary contributions and assessed contributions for years. For instance:

Such financial contributions to a UN agency that is collaborating with a trade association that represents companies responsible for a wide range of devastating health harms to farmers, farmworkers, and rural families around the world are unacceptable. Moreover, in the frame of the European Green Deal, the European Commission recently committed under the Chemicals Strategy for Sustainability, to “ensure that hazardous chemicals banned in the European Union are not produced for export. For the sake of coherence, such a decision cannot be countered by the EU supporting financially the FAO-CropLife collaboration.

Therefore PAN Europe recently asked the EU to suspend its financial contributions to the FAO as long as the Croplife partnership is not ended. As we are still awaiting an answer from the European Commission and the Member States FAO representatives to our plea, the question remains unsettled: will the EU and the Member State take the lead in promoting human rights and environmental protection, or will they let the corporate sector capture the main role in the democratic and accountable processes on the direction of the FAO’s work?