Pesticide Action Week 2019- together for a pesticide free future! 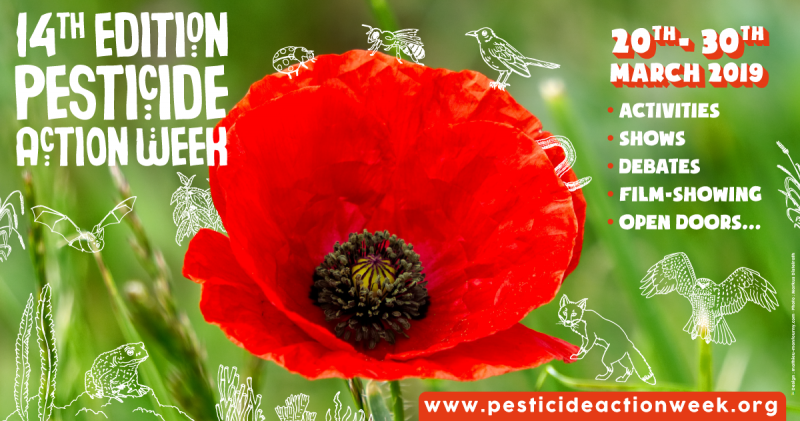 Pesticide Action Week is a grassroots initiative orchestrated by Générations Futures, Pan Europe member organisation in France, taking place during the first ten days of every spring (20th-30th of March) when usually the spraying of pesticides resumes. PAN Europe supports and participates in this ten-days of action for a pesticide free world.

Pesticide Action Week has been back with the 14th edition with the annual theme BIODIVERSITY! Here is a quick glance of activities in our network:

France: With more than 1000 local events, there has been a very strong mobilisation in France. During the week, Generations Futures organised art contest for the primary schools across France with the theme “Biodiversity near us”. Along with that, a sensibilisation campaign “(Bio)diversity on my plate” was launched to promote sustainable food in the public canteens: less meat, more plant-based proteins and lots organically grown vegetables!

Belgium: In the framework of 2020PesticideFree campaign, Flemish organisation VELT “Pesticide-Free Gardening is Possible! has focussed on private lawns. In Wallonia, since 10 years, Adalia has been organising a full Pesticide-Free Spring from 20 March to 20 June. The extended time period allows to promote many more activities in cooperation with local municipalities, associations, and citizens. Farm feasts, pesticide-free gardening, nature walks, and many more events celebrating a spring without pesticides! Moreover, Nature et Progres has been running a successful campaign "We believe in a Pesticide-Free Wallonia" with many actions to save the bees in the region and to promote alternatives to pesticides.

Spain: Ecologistas en Accion has called on all the competent administrations and the different political parties in Spain to commit themselves to adopt a plan to reduce by at least 50 % the use of pesticides before the end of the next legislature, that is, by the end of 2023. Ecologistas organised a seminar focusing on pesticides and their harmful effects on biodiversity where PAN Europe also participated as speaker to talk about the implementation of the EU Directive on Sustainable Use of Pesticides in Spain. Moreover, Fundacion Alborado raised awareness on the presence of pesticide residues in fresh fruits and vegetables urging that in 45% of fruits and vegetables in Spain there are 119 different types of pesticides, with a sample analysis 4 times lower than the European average and without analysis of cumulative effects. Similarly, Fundacion Vivo Sano undertook difffrent actions during the week through the No Toxic Home and Environmental Health in Schools projects. An intergenerational meeting was organised at the LADIS Neighborhood Community Garden where a brief talk and discussions were held about the dangers of pesticides and possible alternatives (agroecology, urban gardens ...). Vivo Sano also launched a series of infographics with information and useful tips on pesticides and their alternatives.

Inspired and want to get involved? Check out the official website of Pesticide Action Week and contact us for more info!

Blog
Agrichemicals: European Commission’s Recurrent Lack of Ambition Stands in the Way of Tackling Farmer’s Dependency on Pesticides!
Growing sugar beets without neonicotinoids? Austrian farmer testimony show it’s possible
Italian Court confirms municipalities are entitled to ban the use of pesticides
Soil is our ally yet we treat it as an enemy : Why are healthy soils key to a sustainable agricultural model ?
PAN Europe takes the issue of pesticide derogations to the Court of Justice of the European Union
END_OF_DOCUMENT_TOKEN_TO_BE_REPLACED