The Industry's Toxic Influence on the European Union's Legislation 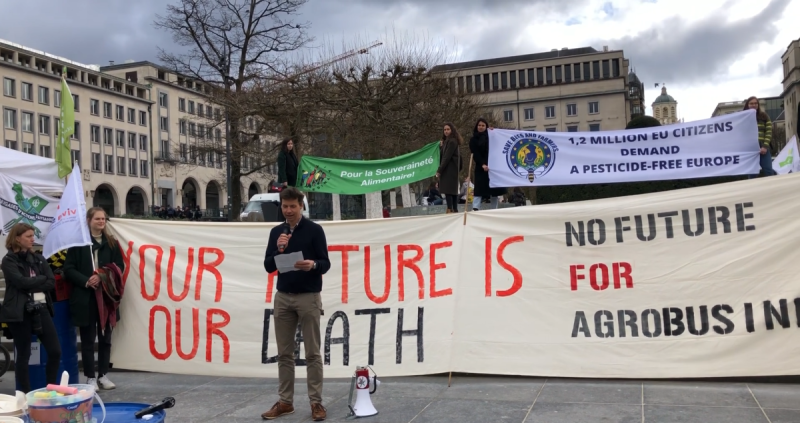 On 15 March 2022, Pesticide Action Network Europe joined  a protest at the Forum for the Future of Agriculture in Brussels. This lobby event is organized by Syngenta and other agribusiness companies. It was attended by several key decision-makers from the European Commission, including Commissioner for Health and Food and Safety, Stella Kyriakides.

The timing of the event is implicit: a week before the European Commission’s publication of the proposal to revise the Sustainable Use of Pesticides Directive (directive 128/2009/EC, here after ‘SUD’).

The protesters raised their voices warning against the toxic influence of the chemical and agri-food industry on EU legislation. These companies use using events like this to present their false concern for the environment and human health, while actually trying to steer the EU legislation in their own direction, by launching unsubstantiated claims about the necessity of the use of chemicals in food production systems.

Pesticide Action Network Europe stated in multiple EU national languages that “1,2 MILLION EU CITIZENS DEMAND A PESTICIDE-FREE EUROPE”. Currently are Member states in the process of validating the signatures collected in the European Citizens’ Initiative Save Bees and Farmers that collected 1,2 million signatures. These EU citizens demanded 80% reduction in use and risk of pesticides by 2030, and complete phase-out by 2035, measures for biodiversity restoration, along with the support for farmers in their transition toward agroecology.

We are eager to know who will make a stronger impact to legislators:, the industry with its demands that harm human health, nature and the environment, or the EU citizens who want a sustainable and secure European agriculture.

The leaked draft for the SUD proposal was weak. It lacked strong, binding targets. With this the objectives of European Green Deal will not be reached within time and it would leave us in pretty much the same position where we are now, possibly even worse.

The European Commission is well informed by many environmental and health protection organizations’ on their demands for the SUD revision, gathered in the Joint statement. We ask for the adoption of ECI Save Bees and Farmers objectives that will protect the health of EU citizens and restore biodiversity, instead of benefiting industry and interest groups.

PAN Europe’s Position paper, sent to Commission, defines 10 key points to be addressed, putting a strong accent to the Integrated Pest Management principles, which are the actual and true solution for freeing farmers from pesticide dependence.

After more than 10 years that did not lead to the implementation of the SUD directive, now is a chance to fill the gaps in previous legislation and its implementation at Member states levels. This should bring about to a regulation that will finally enable fulfilling the Green Deal goals.

We ask the European Commission to listen to the voice of EU citizens, and take into account independent expert’s opinions and independent studies, instead of those funded by the Industry.

Today’s event should be the start of a new approach and the end of a period of interference by the chemical industry.

Blog
UN Special Rapporteur advices Italy to significantly reduce pesticide use
The toxic alliance between the FAO and CropLife International
Why is FAO so complacent with Syngenta’s killer herbicide Paraquat ?
Have your say in the Consultation on the EU Pesticide Reduction Law
EU Commission refuses to protect children and the unborn against neurotoxic pesticides
END_OF_DOCUMENT_TOKEN_TO_BE_REPLACED