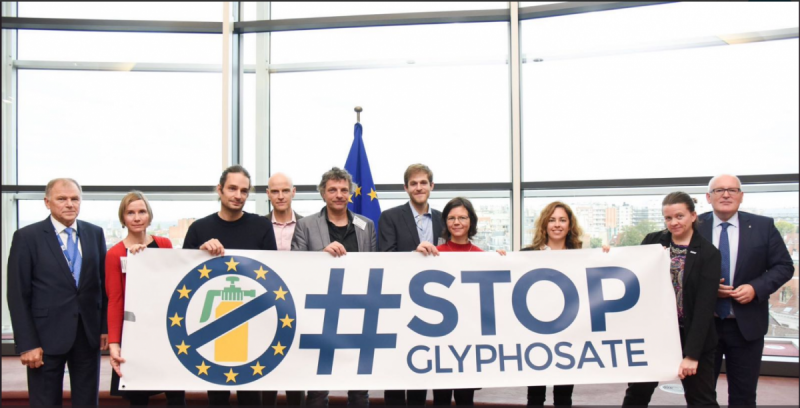 The European Citizens’ Initiative (ECI) to ban glyphosate (and reform the pesticides approval procedure and protect citizens and the environment from exposure to hazardous pesticides) was officially handed in to the European Commission on 3rd July 2017, with a total of 1,320,517 signatures having been collected from all across Europe. Also in July 2017, Peter Clausing (PAN Germany) together with Claire Robinson PhD (GMWatch) and Helmut Burtscher (from Global 2000)  released a report on “Flaws in Glyphosate Toxicity Assessment”, showing how studies proving negative effects of the substance were dismissed from the pesticides evaluation procedure.

On October 13th PAN Europe published a study from the University of Wageningen showing extensive contamination levels from glyphosate and its metabolite AMPA in European soil.

At the conference on “How to really feed the world? A fair Food & Agriculture policy” held by the Greens/EFA in the European Parliament on October 18th, PAN Europe presented its most recent report (commissioned by the Greens) on “Alternative methods to glyphosate and other herbicides in weed management”, as well as the trailer for the accompanying documentary on the same issue. The next day, on October 19th, the European Parliament’s Environment Committee backed a full ban on glyphosate-based herbicides by December 2020, with immediate restrictions on the use of the substance.

On October 23rd, the ECI coalition met with first Vice-President Timmermans & Health Commissioner Andriukaitis to discuss ECI and demand a ban on glyphosate; here, PAN Europe’s policy recommendations on the reauthorisation of glyphosate were also presented.

On October 24th, the European Parliament voted in plenary session to adopt a resolution to phase-out glyphosate by 2022 without any extension and applying restrictions to its use. Although not legally binding, the EP resolution’s political weight was definitely felt the next day, at the SCoPAFF meeting on Oct 25th; no vote was finally held as it became evident that the Commission’s proposal for a 10-year unrestricted re-authorisation did not garner sufficient support among Member States to reach a QMV. On the same day, members of the ECI coalition gathered outside the Borschette building in Brussels where regulators were discussing the substance’s reauthorisation: activists staged a symbolic stunt to protest against reauthorisation and to call on EU institutions to stop colluding with pesticide manufacturers.

On Saturday 4th of November, activists gathered in Berlin for a human banner action organised by Greenpeace at Tempelhofer Feld to call on Member States’ governments (in particular the German one due to its continued abstention in the glyphosate voting rounds) to reject the reauthorisation of glyphosate and push for a ban on the substance. On November 7th, PAN Europe and Générations Futures published a joint report on the unscientific dismissal of studies proving the negative effects of glyphosate from the pesticides evaluation process.

On November 8th, Avaaz activists set up a free urine testing site in front of the Commission to underscore glyphosate’s ubiquity in the food chain and to send a message to regulators meeting the next day to ban the substance. However, the SCoPAFF meeting on November 9th failed again to secure a qualified majority vote for the Commission’s 5-year unrestricted reauthorisation proposal. As such, the decision was relayed to the Appeals Committee, which met to vote on the proposal on the 27th of November, when the final decision was taken; a qualified majority of Member States finally voted in favour of the European Commission's proposal to renew the glyphosate authorisation for 5 years. On the same day, the ECI coalition had staged a symbolic “tug-of-war” action event in Brussels to call on regulators to listen to people’s demands to protect health and the environment, rather than to curry to agrichemical producers’ favour by reauthorizing the substance unrestrictedly. Obtaining a qualified majority vote however was only possible thanks to a more-than-opaque last-minute U-turn by Germany, whose Agriculture Minister Christian Schmidt overrode his colleague Barbara Hendricks’ (Environment Minister) previous orders for Germany to abstain or vote against the proposal, making the country vote in favour and as such swaying the entire vote toward adoption of the proposal (finally reaching 65,71% of EU population). While Hendricks immediately denounced Schmidt’s move as occurring without her knowledge or consent, chancellor Merkel public reprimanded him for taking, on his own, a decision which “didn’t reflect the instruction that the government agreed”.

On November 20th, representatives of the #StopGlyphosate ECI coalition presented the ECI demands in a public hearing at the European Parliament; PAN Europe’s Environmental Toxicologist, Angeliki Lysimachou, presented the third ECI demand (namely, “Setting EU-wide mandatory reduction targets for the use of pesticides”).

Nonetheless, Health Commissioner Vytenis Andriukaitis was quick to congratulate himself on Twitter for Monday’s achievement, and to declare the outcome “a victory” in a Politico interview he gave just after the vote.

While the proposal is a major improvement compared to a standard 15-year, unrestricted renewal, the vote’s outcome does not however acknowledge concerns over the product’s carcinogenicity, it ignores respect for the precautionary principle, and it does not hint at the possibility of a ban in the future, let alone at that of applying immediate restrictions on certain “unnecessary” uses (i.e. use in public areas such as streets, schools, parks, etc.). Indeed, this is what the European Parliament had called for in a (non-binding) resolution on October 24th.

After the Commission’s proposal voted in the Appeal Committee was published, it emerged that a few added elements had been included in the text, such as “pay[ing] particular attention to… the protection of amateur users…and biodiversity…”; while these may be viewed as positive improvements, it remains to be seen how effective they will be in ensuring a high level of protection of people and the environment, given that, as of yet, there are no official bodies to monitor whether pesticide use is compliant with the Sustainable Use of Pesticides Directive (SUD), and to carry out sanctions where it is not. As such, it appears that with this vote the Commission has lost a great chance for Europe to spearhead the transition toward a progressive and sustainable agricultural model; rather, it would seem that they have relayed the crux of the decision for the next Commission to deal with, in five years’ time.

PAN Europe’s Environmental Toxicologist, Angeliki Lysimachou stated: "Although this might seem an improvement compared to the original proposal for a 15-year renewal, it does not address the concerns of European citizens and provides no guarantee that the general public and the environment will be protected from the harmful effects of this chemical. This decision reveals once again the sad truth that governments are more keen on protecting the highly profitable pesticide industry than the health of their people and the environment".