Conventional apples - not recommended for babies and children 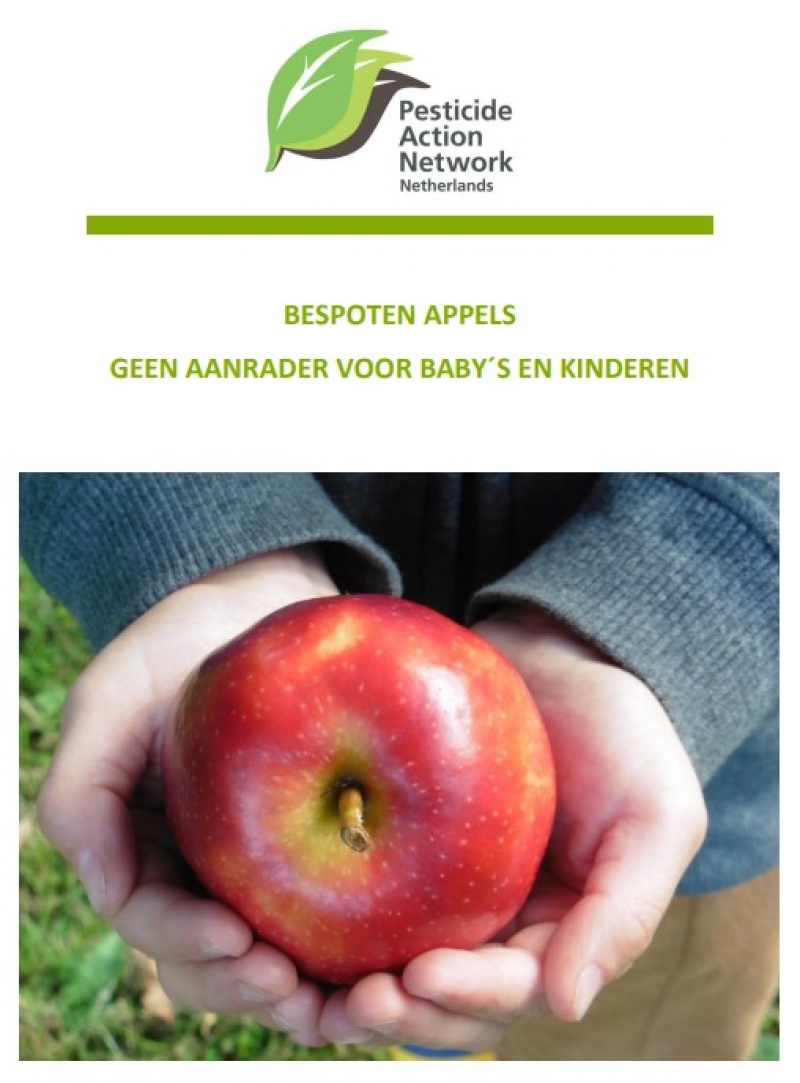 Non organic apples sold in supermarkets in the Netherlands are not fit for consumption by babies and children. This is the conclusion of our member PAN Netherlands after testing 17 samples of the most popular hand apples, Elstar and Jonagold, from five different supermarkets in different locations. They had them tested for pesticide residues in a certified laboratory.

Captan and Fludioxonil - pesticides that should have been banned long ago

Captan is on PAN International's list of Highly Hazardous Pesticides (HHP). The substance is suspected to be carcinogenic by the European Food Safety Authority EFSA. It is extremely toxic to aquatic life.

Fludioxonil is a broad-spectrum fungicide authorised in all 27 EU Member States. Human health concerns include liver and kidney damages. Endocrine disrupting effects are suspected but comprehensive data is lacking.

Fludioxonil was classified by the EU as a Candidate for Substitution, because it meets two of three criteria of Persistence, Bioaccumulation and Toxicity (PBT). It has long lasting impacts on the soil, water, and the wider environments. It poses high risks for fish and aquatic invertebrates. Independent studies further found that the substance holds lethal and teratogenic toxicity for amphibians. (from our report Pesticide Paradise, May 2022)

More information on the most toxic pesticides available in the database in our Ban Toxic 12 campaign.

No statutory maximum residue limits (MRL) were exceeded in the samples examined. Nevertheless, as a precautionary measure, sprayed apples are not recommended for pregnant women, babies, toddlers and children. All hand apples studied exceeded the European standard for packaged baby and toddler food, ranging from 7 to 112 times.

PAN-NL strongly advises consumers and in particular vulnerable groups, pregnant women and families to buy only apples (and other foodstuffs) grown without chemical pesticides for babies, toddlers and children.

Pesticide use on apples and other crops in the Netherlands

According to Central Statistical Office in the Netherlands (CBS, 2022) data, apples are intensively treated with pesticides. In 2020, the use was 21.3 kg per hectare, ranking them sixth place among the most pesticide-intensive agricultural crops. Growing lilies is at the top with 113.7 kg/ha, followed by chrysanthemums and roses under glass, tulips open ground, gerbera ́s under glass and seed potatoes. In comparison, per hectare of agricultural crop in the Netherlands in 2020, the use of pesticides was 7.0 kg.

The report and press release in Dutch can be downloaded from this page on the website of PAN Netherlands.

Blog
Far too many pesticides in Spanish food
Symposium in Slovenia - Solutions for the transition to agroecology
Wildlife populations hit new lows - how to avoid Silent Spring?
UN Special Rapporteur advices Italy to significantly reduce pesticide use
The toxic alliance between the FAO and CropLife International
END_OF_DOCUMENT_TOKEN_TO_BE_REPLACED