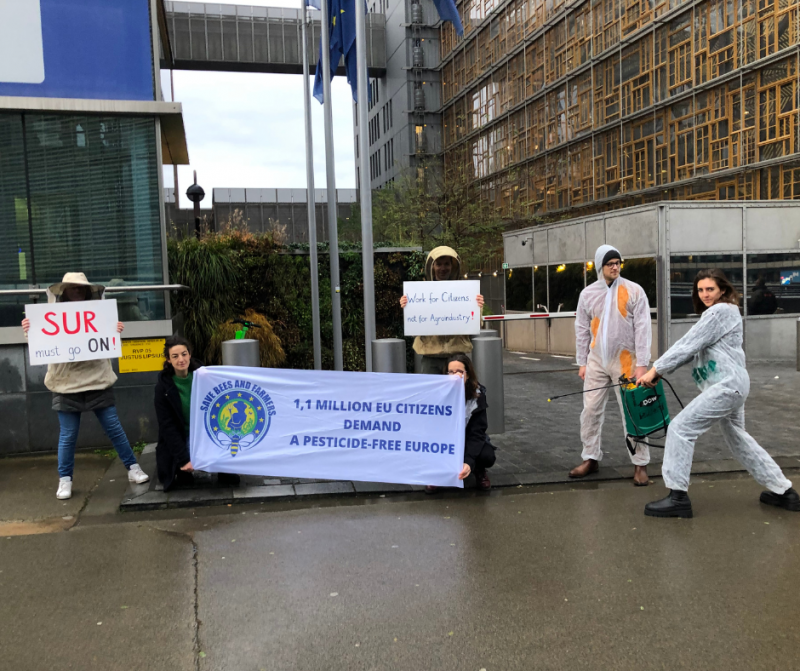 At the COP15 in Montreal, an agreement was signed to protect nature and stop the biodiversity loss by 2030. Very urgent and very important. But will it really work in the EU? On the very same day, the EU Council decided to delay or even completely derail the proposed 50% pesticide reduction regulation (SUR) from the European Commission. A slap in the face of the 1,1 million citizens that signed the Save Bees and Farmers citizens initiative. Protests from organisations all over Europe and a letter signed by over 700 scientists were denied. What is going on?

On December 10 the EU agriculture ministers decided to ask for a new impact study on reducing pesticide use on food production. They pretexted the war in Ukraine and the energy and food crisis. On December 19th this request was formally adopted by the energy ministers in the EU Council without discussion.

To many it might sound harmless: a study to have some extra information. But the intention and timing are far more evil. With this new study, Europe is undermining its own Green Deal and farm-to-fork strategy that aimed to achieve a sustainable agriculture and support climate goals. The lobbying machine of industrial farming organisations Copa-Cogeca and the pesticide industry Croplife, demanding an additional impact assessment, started immediately after the Green Deal vote. They shifted up gears when Russia invaded Ukraine. The temporary shortage of grain and sunflower oil was a rewarding argument to alert governments of possible food shortage. Agriculture ministers and conservative politicians immediately fell for the lobbying that we need pesticides to produce enough food. The fact that pesticides destroy citizen's health and kill biodiversity as well as soil life and deplete our soil to such an extent that agriculture will soon be impossible in many places is apparently not heard.

This additional study will delay legislative work to reduce pesticide use. Especially because negotiations will only continue on technical aspects of the proposal. This could be deadly to the Pesticide Reduction Regulation SUR. If there is no vote before the summer, the chances of the proposal still getting through are practically gone. By the end of 2023, Europe will go into election mode and the chances of decisions on new legislation by then are as good as non-existent.

Wave of protests from all over the EU

The decision is a slap in the face of the 1,1 million Europeans that signed for an even more ambitious pesticide reduction in the Save Bees and Farmers ECI. It completely neglects the urgent letter signed by over 700 scientists and the calls from nature conservation, health, water, farmers and consumers organisations all over the EU.

The citizens and organisations demand the EU to proceed with no further delay and to improve the proposal for pesticide reduction and show more ambition. The European Commission must have seen this request for an additional study coming, so they should be able to quickly deliver additional information. Such a study could include an insight into the many positive effects of pesticide reduction and an insight into the danger to food security by biodiversity collapse, soil depletion and water pollution caused by industrial farming. Many existing studies can be used to show this.

All countries in the EU should stop bowing to pesticide producers and industrial farming lobby and to no longer delay the urgent and necessary progress towards sustainable farming and true food security. Pesticide-intensive agriculture does not feed the world, this is a myth.

And pesticide reduction is not only a discussion for new laws for tomorrow, it should begin today. Make use of the legislation that is already in place and apply it. On the EU level this means that authorisations for pesticides that are on the list of most toxic pesticides (Candidates for Substitution) should not be prolonged. On the national level we urge an immediate and complete stop of the abusive practice of granting derogations for the use of banned pesticides. And all countries should ban the use of glyphosate and other herbicides for pre-harvest treatment and for ‘renewal’ of grassland. This can and has been done by some countries.

The developments show that European politicians are still in the grip of powerful industrial lobbies. To free us from this suffocating hold we need active involvement from citizens, scientists, organisations, celebrities and all who care for a healthy and biodiverse world and a happy future for us, our children and grandchildren and the generations to come.

Blog
Denmark to ban groundwater polluting fungicide - after 18 years of use
Cypermethrin: reason to challenge Belgium's authorisation system of toxic pesticides in national court
Insecticides contaminated with Per- and polyfluoroalkyl substances (PFAS) need to be urgently addressed
EU pesticide regulation and Green Deal under attack
Far too many pesticides in Spanish food
END_OF_DOCUMENT_TOKEN_TO_BE_REPLACED