Banned pesticides still in use in the EU

Pesticide active substances can be banned at EU-level if they do not meet the safety criteria to protect human or animal health, the environment or ground water. However, the Europe regulatory framework allows Member States to grant 120-day derogations for the use of pesticides that are not authorised. We analysed the EU Commission database on the so-called ‘emergency authorisations’ for 24 normally non-approved active substances between 2019 and 2022. We found no less than 236 derogations given to 14 substances from that list. 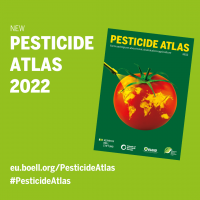 In beer and in honey, on fruit and on vegetables, on playgrounds’ grass, in urine and even in the air – traces of pesticides used in agriculture can be found everywhere. That pesticides deteriorate human health, biodiversity, water, and soil is not a new insight by any means. As early as 1962, biologist Rachel Carson published her globally acclaimed book “Silent Spring” in which she described the harmful effects of pesticide use. Her work has been groundbreaking for the environmental movement and led to the ban of highly toxic chemicals such as DDT.

Pesticide Paradise: How industry and officials protected the most toxic pesticides from a policy push for sustainable farming

This report shows how the industry wrote the rules for substitution of the most toxic pesticides. As a result none of them have been replaced and contamination of fruit  has grown worse over the last 10 years.

Forbidden fruit: The dramatic rise in dangerous pesticides found on fruits and vegetables sold in Europe and evidence that governments are failing their legal obligations

European citizens have been exposed to a dramatic rise in the frequency and intensity of  residues of the most toxic pesticides on fruits and vegetables sold in the EU. This report and its primary conclusion contradict official claims that toxic pesticide use is declining and expose a complete failure by Member States to implement EU Regulation and protect consumers.

This report explores the various approaches taken by eight European member states to reduce or ban pesticide use in “sensitive” public areas and towns at large. The report underscores that phasing out pesticides in these areas is a matter of political will and that pesticidefree town maintenance is already successfully implemented by a multitude of actors and municipalities.

Taking aim with a blindfold on

Halving the use and risk of pesticides by 2030 is one of the key measures under the European Green Deal to halt biodiversity loss and promote healthy ecosystems. But currently, no meaningful data are available to show which pesticides are used where, when, and in what quantities for food production and other purposes.

Pesticides in our bedroom

PAN Europe's latest report, published on World Food Safety Day, shows that the controversial EU food safety agency (EFSA) ignored positive cancer risk test results to clear the use of 12 unstable pesticides that are now widely used in Europe. The report demonstrates that the approvals are unreliable and the pesticides are not proven safe. The substances could help explain rising rates of breast and prostate cancer in Europe.

With this report PAN Europe wants to show that the necessary changes to our agricultural system can be done now through an holistic uptake of Integrated Pest Management (IPM). However, as this report shows, the spending of Member States is currently going in the wrong direction : instead of supporting an holistic approach of IPM and the transition towards non-chemical, agroecological practices that work in harmony with nature, they offer CAP subsidies to practices that are not applied in a coherent and integrated approach.